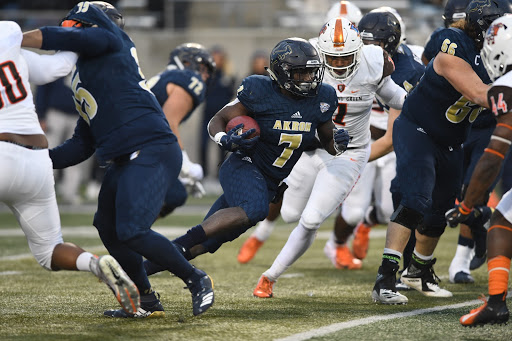 Senior PK Nick Gasser (Liberty Township, Ohio) was able to score for the Zips in the first quarter with a 38-yard field goal and a 32-yard field goal in the second quarter.

Also in the second quarter, senior DB Jordan George (Dayton, Ohio) intercepted the ball and returned 53 yards. This was George’s seventh career interception and the first of the current season.

With 10 seconds left in the second quarter, Bowling Green scored a touchdown and made the PAT. At halftime, this left the Zips down 7-6.

In the third quarter, the Falcons were able to increase their lead to 14-6 with a touchdown run.

Bowling Green capped their win over the Zips at 21-6 after an 8-yard pass.

The Zips football team had a senior class of 29 student-athletes who have lost the last three consecutive Mid-American Conference games. A full list of seniors can be found in the Post-Game Notes.

Also, in the Post-Game Notes, the senior class is mentioned to be a part of the rebuilding process, which includes helping the Zips to win at least five games each season.

As an accomplishment for the program, the Zips were eligible to compete in a bowl game in two of the past three seasons.

This senior class managed to win the Wagon Wheel all four of their years in school against Kent State University and claimed the MAC East title in 2017.

Twelve of the 29 seniors have already completed their Bachelor’s degrees and are now pursuing Master’s degrees.

The University of Akron will close out the season with two final away games. The first at Ohio University on Nov. 23, and the other in South Carolina on Dec. 1.