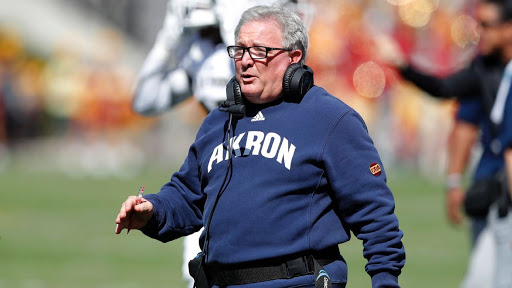 Hours after a 28-3 loss to South Carolina to end the season, The University of Akron announced that football head coach Terry Bowden was relieved of his duties as the Zips finished the season with a 4-8 record.

In his seven seasons with the Zips, Bowden, maintained a 35-52 record while also establishing several signature achievements for the team, including a 5-2 record over arch-rival Kent State during his tenure.

Bowden led the Zips to two bowl games in the past three seasons, capturing the team’s first-ever bowl win at the Famous Idaho Potato Bowl in 2015.

In 2017, Akron earned its ticket to Detroit to appear in the MAC Championship for the first time since 2005, losing to Toledo in the conference title game.

The Zips would go on to stun Big Ten powerhouse Northwestern in an upset that marked Akron’s first Big Ten defeat since toppling Ohio State in 1894 under head coach John Heisman, for whom the Heisman Trophy is named.

The defeat over Northwestern would prove to be the peak of the 2018 season, however, as the Zips struggled greatly throughout the remainder of their schedule, losing their last five games.

The team’s offensive struggles and overall performance this year yielded a 2-6 record in the MAC, including deficits of 20 points or more in losses to Miami (Ohio), Eastern Michigan and Ohio.

Though appreciative of Bowden’s efforts in his seven seasons with the team, Director of Athletics Larry Williams, in conjunction with Interim President Dr. John Green and the Board of Trustees, determined a coaching change was warranted.

“It is clear that we need to make a change if we are going to consistently achieve at an even higher level. Akron Athletics greatly appreciates all that Terry has done for the University, and we wish him the best moving forward,” Williams said.

Bowden was hired by Akron in 2011 to replace outgoing head coach Rob Ianello, who was ousted after two consecutive 1-11 seasons. Bowden was no stranger to the University, however, as he previously served as an assistant coach for the Zips under Gerry Faust in 1986.

Bowden, 62, is a well-known figure in the college football world.

The son of Florida State legend Bobby Bowden, he is best known for his tenure coaching at Auburn during the 1990s, where the Tigers maintained a perfect, 11-0 season in his debut with the team in 1993.

During his career, Bowden also coached at Salem, Samford and North Alabama.

Bowden reflected on his time at Akron in a statement to the University community.

“It’s been one of the greatest joys of my life to come to Akron and build this program, but also for the great relationships I have established,” Bowden said. “I am blessed to have the greatest fellowship of friends here in this community. I want nothing but the best for The University of Akron and all of Zips Nation.”

Williams indicated that a private firm has been hired to conduct a national search for a new head coach.