As part of the Rethinking Race Events at The University of Akron, the Residence Hall Program Board had Nelly’s Echo perform at Starbucks in the Taber Student Union. 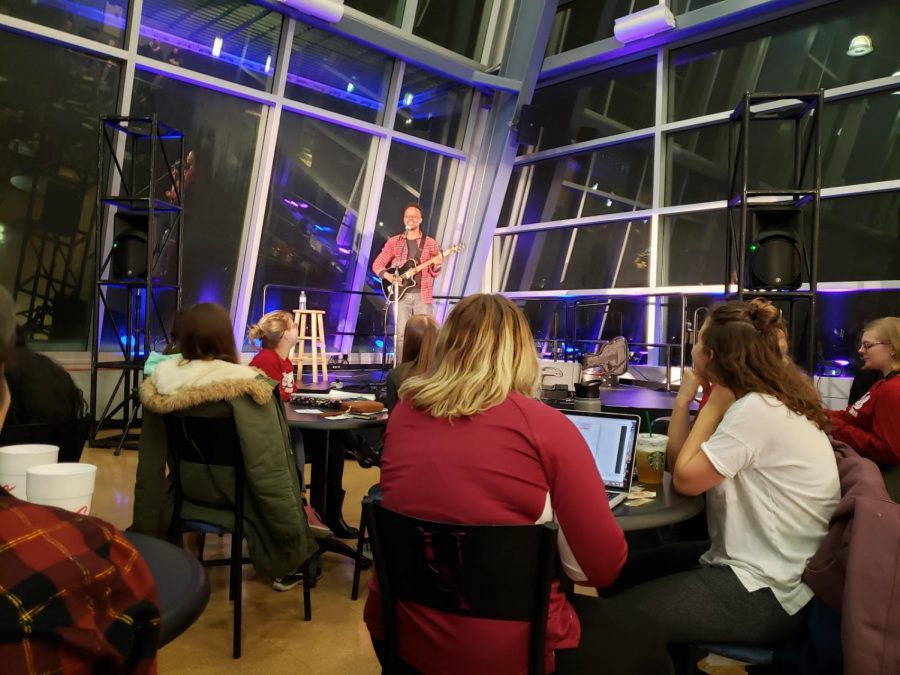 Throughout his performance, Nelly’s Echo encouraged the audience to sing along if they knew the lyrics.

As part of Rethinking Race and the 7:17 events on campus, vocalist and guitarist Nelly’s Echo performed in the Jean Hower Taber Student Union Starbucks on Feb. 5.

The 7:17 Coffee House series is run by the Residence Hall Program Board, where the first 100 people to attend are given a voucher for one free coffee or tea while listening to either a musical or comical performance.

Sophomore Lexie Gore, the music and comedy chair for RHPB, said they saw Nelly’s Echo at a convention for residence life committees and thought he would be a great person to have performed on campus.

Originally from Lagos, Nigeria, Nelly’s Echo said he started playing guitar around 15 to 17 years ago during his early years of graduate school; but he had been singing for as long as he could remember.

According to Nelly’s Echo website, the singer had competed in season three of The Voice on Team Christina before eventually being knocked out of the competition after his second appearance on the show.

However, without losing the competition, Nelly’s Echo said he would have never learned one of the most important lessons in life: Always be yourself and be proud of who you are.

“The thing about when the lights hit you and the cameras come on, sometimes you try to put on a facade because you think that’s what everyone wants to see. When in reality, just being yourself is actually the best thing for people to see of you,” Nelly’s Echo said.

Throughout the entire performance, Nelly’s Echo played a mixture of cover songs such as “I’m Yours” by Jason Mraz and “Hallelujah” by Jeff Buckley to original songs.

Nelly’s Echo also added jokes and banter with the audience throughout his performance, keeping everyone positive and entertained until the end of his last song, which was Gore’s favorite part of the show beside his voice.

Whether through his music, stories or playful comedy with the audience, Nelly’s Echo said his goal throughout life is “to perform to inspire” while leaving “every situation or person… a little bit better off.”

Before leaving the stage, Nelly’s Echo left the audience with a piece of advice he hoped they would never forget.

The next event from RHPB is on Feb. 18 at 9:09 p.m. in the Student Union Starbucks with comedian Derrick Knopsnyder. Gore said more details on other events can be found through Zipmail.

As for the rest of Black History Month and the Rethinking Race Series, Gore encourages students to attend different events because there is always an opportunity to learn something new.

“I personally loved Rethinking Race last year. Every event I went to, something just popped out even more,” Gore said. “Definitely go out and learn something new that you may have not had known.”