Need a new laptop for a low, low price? This little-known shop just at the border of the main campus has you covered. 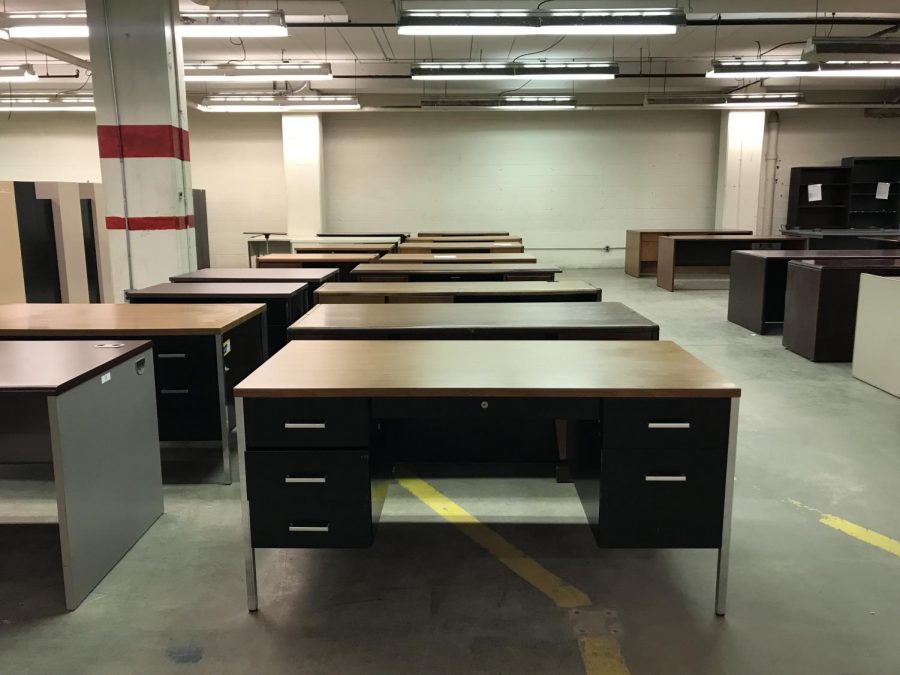 Gently used desks await their next owner in the warehouse of Central Stores.

Located in the Administrative Services Building on Mill St. near Quaker Square, Central Stores is the place to go for bargain-priced items that the University looks to get rid of.

Staffed Monday through Friday by a handful of individuals under the management of storekeeper J.P. Colo, Central Stores serves a larger purpose beyond just selling surplus property.

More than 30,000 packages per year are received by the University through this store, whose primary function is to serve as UA’s main supply hub for sending, receiving and distributing major shipments, and making sure they arrive at their corresponding departments.

The stores also receive items that are no longer needed by various departments and staff but could be useful for others, and this is where the surplus comes in. A large portion of the gently used items held in the stores’ warehouse is allocated for redistribution to University departments and staff at their request.

The other major function of Central Stores is to sell off surplus property to the public.

Sometimes it is clear that there is no one left among the staff at UA who would be interested in some of the used school furniture or computers. Therefore, Central Stores also makes it available to the general public.

Another portion of the similar items at the Central Stores is made available for sale to University students at low prices. Gently used furniture items such as desks, file cabinets and chairs can be purchased for less than $20. Desktop computers that run Windows and iMacs go for less than $100.

According to Colo, Central Stores are especially popular among international students, as they search for low prices on much-needed supplies.

In addition to sales, Central Stores have also collaborated with The Chapel and other organizations in the area to help distribute the items to students and others in need. All surplus items are inspected for quality and repaired before sale and redistribution.

For items that cannot be sold off from Central Stores’ warehouse, there is an eBay-style online auction website specifically for surplus property items from various organizations and agencies.

There are currently about a dozen items offered on the site by the University, and many more are offered by various other institutions. The site showcases items from other schools, police departments, private corporations and government agencies, among others.

Need a functioning work truck, passenger van, building air conditioner unit, or another industrial item at a bargain? The Public Surplus website has what you need.

If none of these options work, Central Stores also gives away or sells the most unwanted of items to companies that will properly dispose of and recycle them in an environmentally friendly manner.