While figures such as Kaitlin Bennett visit UA, some may wonder what policies allow them to come to campus. 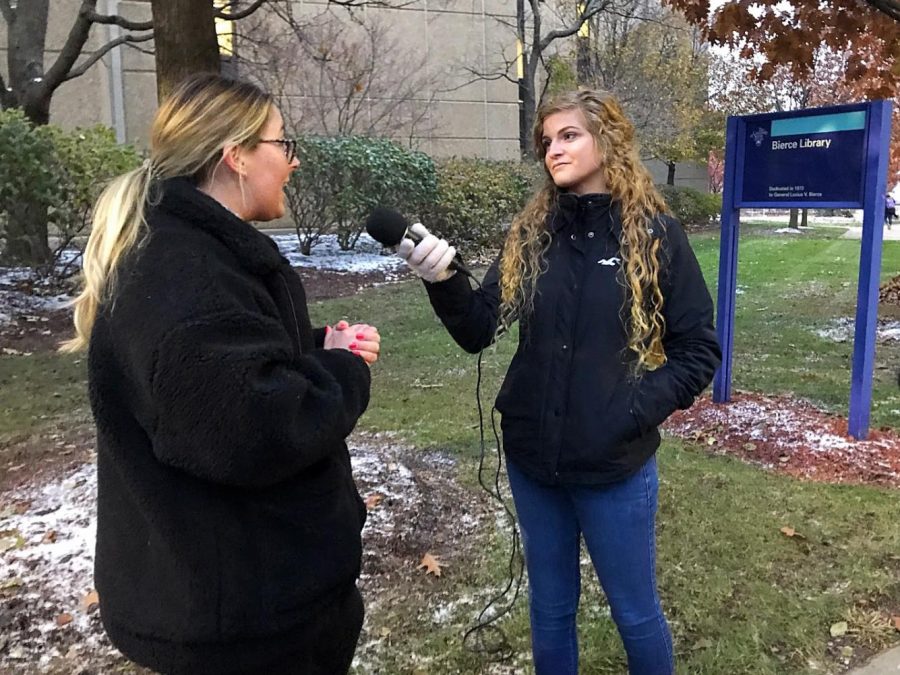 With a microphone in hand, Kaitlin Bennett engages in discourse with UA student.

In recent months, Kaitlin Bennett, a figure known for her strong and sometimes controversial stance on Second Amendment rights, has twice visited The University of Akron. During both of her visits, Bennett was greeted by supporters and opponents alike.

This is not the first time an individual or group has caused discourse on campus. An anti-abortion group, Created Equal, had visited the University in the past as well, displaying graphic images of abortion procedures. The last time they visited UA was September of last year.

Despite the controversy that often surrounds these groups, the University still allows them to visit campus due to First Amendment rights.

According to University policy, “Expression cannot be prohibited because of disagreement of or dislike for its content” but it “is subject to reasonable nondiscriminatory regulations of time, place and manner.”

As Christine Boyd, Director of Media Relations, puts it: UA can restrict time, place and manner, but cannot restrict content.

However, according to the policy, expression can be prohibited if it interferes with “the normal activities of the institution or invades the rights of others.”

While the wording of the policy is ambiguous, what is considered disruptive varies on a case-by-case basis. Boyd said it would normally include things such as being excessively loud next to a building, blocking entrances and exits, and interrupting classes.

While the controversy that stems from visits by Bennett and others may seem disruptive to learning to some, Boyd said that disruption alone does not count as simply making people uncomfortable; it has to disrupt classroom experience.

Generally, the University does not require individuals to formally request space on campus if they are just talking to people, Boyd said.

However, bigger demonstrations do need to pre-register, as well as demonstrations where there is a significant need for campus safety or crowd control, according to the University’s website.

Additional details regarding the assembly procedures policy can be found here.