Hosted by Ohio Marijuana Card, this expo seeks to not only celebrate the legalization of medical marijuana, but also educate about the industry and how to become a registered patient. 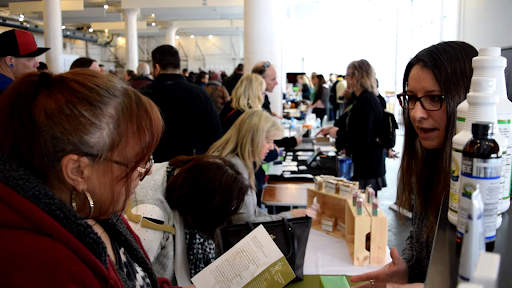 Guests speaking with vendors at the Ohio Marijuana Expo in Cleveland this past January.

With the success of the Ohio Marijuana Expo in Cleveland on Jan. 26, Ohio Marijuana is expanding its cannabis event series to the John S. Knight Center in Akron on March 23 from 11 a.m. to 5 p.m.

In June of 2016, a law allowing the use of medical marijuana, House Bill 523, was passed by Gov. John Kasich, according to the Dayton Daily News.

The law allows patients with one of the 21 medical conditions to use medical marijuana in the forms of edibles, oils, patches, vapes and more, as well as have up to a 90-day supply.

A total of 56 dispensary licenses in the state of Ohio were announced by the Ohio Board of Pharmacy, allowing them to sell to registered patients who have recommendations from certified physicians, according to the Dayton Daily News.

Now, Ohio Marijuana Card is hosting the cannabis event series to not only celebrate the legalization of medical marijuana but to also educate others about the industry and how to become a registered patient.

“Our goal is to bring a face to the cannabis industry as well as the cannabis movement, from advocates to health professionals,” Connor Shore, President of Ohio Marijuana Card, said in a press release.

Those who attend the event do not have to be a patient, as the expo will include doctors, dispensaries and cultivators to answer any questions, the press release said.

It is important to note that in accordance with state law, no medical marijuana will be sold at this event.

However, the expo will have vendors representing various alternative medications and healing methods, as well as sponsors and speakers to help guests become more educated on the cannabis industry.

Lastly, the expo will feature a testimonial video booth that “will give advocates and patients a chance to share their passion for marijuana in a profound and beautiful way…” through their stories, the press release said.

General admission for the event is $15 and on sale now. Tickets can be purchased here or at the door.

Amanda Ferdig, the events director for Ohio Marijuana Card, said the last event sold out and they wanted the expo in Akron to be “bigger and better.”

“Whether you’re looking to get into the industry, learn more about medical marijuana, or you just want to shop health and wellness alternatives, this event is for you,” Ferdig said.