Winning 10 out of the 15 individual events, the UA students led their team to victory with an overall score of 337.33 points. 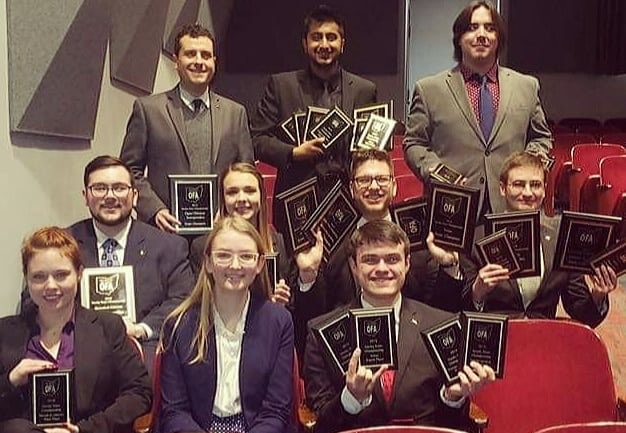 By Megan Parker and José Suárez

Editor’s Note: The Buchtelite would like to apologize to The University of Akron’s Speech and Debate team for the original story “Speech, Debate Renaissance Sweeps Across UA, Rivals.” The story was unbalanced and did not appropriately capture the hard work that UA’s Speech and Debate students completed prior to the event and the spirit that they have.

Speech and Debate programs from all around the state were featured in the intercollegiate competition held in Kolbe Hall on Feb. 15-16. Nonetheless, the students representing Akron walked away with a hard-earned victory.

The current UA Speech and Debate team is comprised of just 10 students and coached by Mark Rittenour, a professor of instruction in the School of Communication.

According to a University press release, the UA students won 10 out of the total 15 individual championships held during the tournament. Overall, Akron won the tournament with 337.33 points, beating out Bowling Green and Ohio.

Rittenour said in the press release that one of the reasons the students competed well in the tournament is due to their hard work and how prepared they were.

“They were focused, hard-working and purposeful in the months and days leading up to this victory. The students masterfully showed our team’s quality-over-quantity approach, and that was reflected in their scores,” Rittenour said.

Senior Nathan Hill, the Akron team captain, won his third consecutive state championship of the trithon, a special category for students entered in events that showcase all three categories of public speaking, the press release said.

As for the rest of the UA Speech and Debate team, the individual results from the tournament are as follows:

Preparation for the seven-month-long intercollegiate speech and debate season begins between the end of the summer and the beginning of the fall semester for UA students, the press release said.

Not only were the UA students ready for their opponents in the tournament, but one student from Bowling Green said they were excited to share their arguments and prose with the audience.

“I try my best to do the literature justice whenever I perform and evoke the same emotions it gave me in others. When I underperform, I feel like I’ve not only let myself and my team down, but the literature as well,” Bowling Green student Sarah Meyer said.

Now that the state tournament is completed and UA secured its victory, the team will now focus greatly toward national tournaments, such as the Interstate Oratorical Association national oratory contest at West Chester University.

“Nationals is the culmination of our season, and the students’ successes at the state level are indicative of great potential at the national level,” Rittenour said in the press release.

Along with the contest in West Chester, Pa., the team will represent UA in three other national competitions in March and April.