While she does not have connections to blindness, Katelyn Sondereker has researched how human eye cells relate to diseases such as glaucoma. 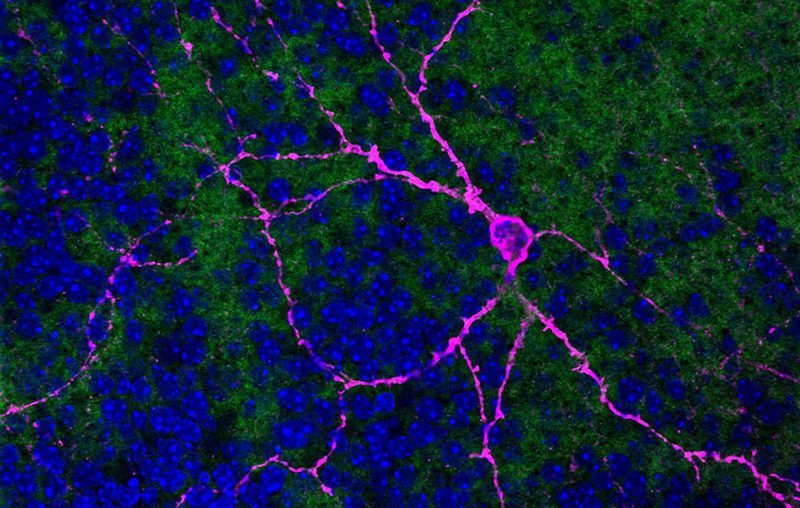 This image, taken by Katelyn Sondereker with a confocal laser scanning microscope, shows a melanopsin ganglion cell in magenta, surrounded by other cells in the retina.

As one of the most important organs in the human body, the eye helps people navigate the environment around them through seeing objects color, form and shape.

Katelyn Sondereker is a fourth-year integrated bioscience Ph.D. candidate at The University of Akron whose research revolves around the human eye, specifically melanopsin ganglion cells.

According to a press release, the melanopsin ganglion cells are “a set of neurons inside the retina involved in regulating sleep patterns and the pupillary light reflex.”

Working in a lab with Dr. Jordan Renna, assistant professor of biology, Sondereker is also studying how glaucoma impacts those cells as previous research shows the cells could help recover some sight for the blind.

These cells were only discovered around 18 years ago, which is recent in the field of retinal science, Sondereker said, which makes them an interesting subject to study.

“There’s not a lot known about them. Anything new discovered about melanopsin ganglion cells and how they’re affected by health and disease is going to be really important,” Sondereker said.

For her research of cells within the human eye, Sondereker was given a $5,000 research grant and the Prevent Blindness 2018 Young Investigator Student Fellowship Award for Female Scholars in Vision Research, the press release said.

At the Prevent Blindness Ohio Scientific Forum at UA in November, Sondereker presented her research results of the melanopsin ganglion cells and how they can be used for early detection of certain eye diseases.

“This was the first time this particular forum was held on our campus, which is a testament to the amount of invaluable eye research being conducted here,” the press release said.

Sondereker’s research is also able to be used in studying other human eye diseases that she may not have focused on originally, such as Alzheimer’s disease.

According to the press release, previous research has shown that the melanopsin ganglion cells can be impacted by early stages of eye diseases.

However, they are also sometimes resistant to different retinal diseases, “making them an ideal focus for disease-related studies,” the press release said.

While her original plans were to go to a school for medical or physician assistant after her undergraduate career, Sondereker found a strong interest in research after volunteering in a research lab with Dr. J.J. Ramirez, biology.

Graduate school was not a part of her plans, Sondereker said, but it has brought about several opportunities she never believed she would pursue. She is also excited to be researching something that could impact human health.

After graduation in May 2020 with her Ph.D. in Integrated Bioscience, Sondereker wants to go to a different lab as a postdoctoral student to conduct additional research and pursue more science-related career paths, the press release said.