Visitors will be able to see a new exhibit featuring three race cars designed, built and driven by the student members of Zips Racing. 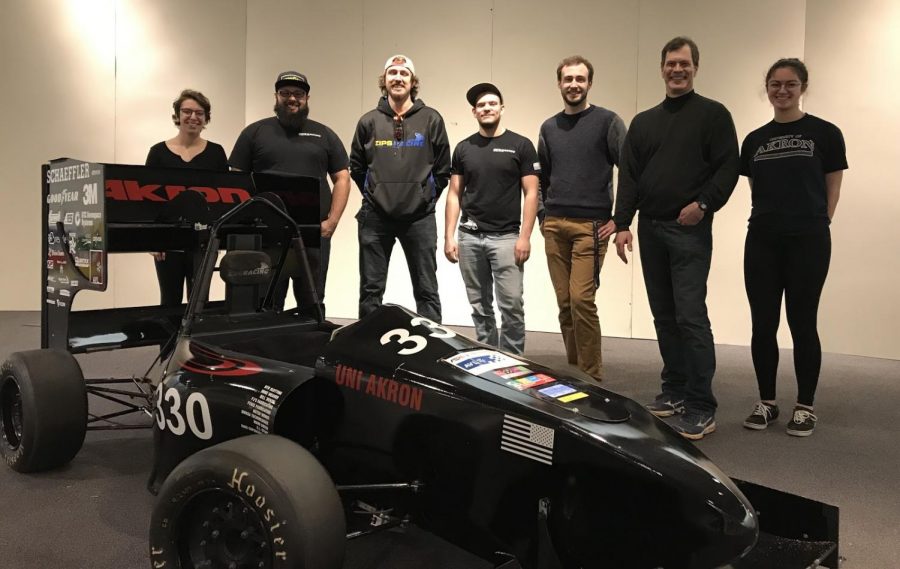 Members of Zips Racing with the 2017 model race car that will be on display at the entrance of the Great Lakes Science Center’s Vroom! A Car Adventure exhibit where visitors can get in the driver’s seat for a photo. Team members are (from left) Maria Hatzis, team captain Ezra Malernee, Jacob Greer, Clayton Brown, David McVan, faculty advisor Dr. Daniel Deckler, Ph.D. and Sidney Mingle.

Three open-wheel race cars designed and built by members of Zips Racing will be featured in an exhibit focusing on Formula One racing at the Great Lakes Science Center in Cleveland starting on March 15 through Labor Day weekend.

This exhibit titled, Vroom! A Car Adventure is also set to include more information about automobiles, along with an exploration of the science, technology, engineering and mathematics that makes them work.

Zips Racing is part of the Society of Automotive Engineers (SAE) Formula Team in the College of Engineering at The University of Akron. Comprised of 30 members, the team will compete at Formula SAE Michigan at Michigan International Speedway in May, a press release said.

Additional competitions for Zips Racing include Formula Student East in Hungary in July and various competitions in Austria and Germany.

Through SAE, students are put into an environment similar to the engineering industry where they can take knowledge from the classroom and transform it into designs used in the automotive industry, the Zips Racing website said.

“The concept of the program is that a fictitious manufacturing company has contracted a group of engineers to manufacture a prototype formula-style race car to be evaluated for production,” the website said. “In the end, the experience and opportunity young students gain from such an engineering project produces engineers not found in classrooms alone.”

Zips Racing team captain Ezra Malernee, a senior majoring in Mechanical Engineering Technology, said in a press release that the team is excited to have their cars featured in the exhibit.

“We all remember going to the Science Center as kids, having a blast and learning a lot. It’s a great feeling to know that our cars will help other kids discover more about automobiles,” Malernee said.

The three cars from Zips Racing are the only cars chosen to be in the exhibit and will constitute a certain portion of the full presentation, according to the press release.

The 2017 model race car will be present at the entrance to the exhibit, where visitors will be allowed in the driver’s seat to get a sense of what it is like to be behind the wheel and to pose for a photo.

Meanwhile, the 2012 model will be partially dismantled and have its intricate parts labeled and on display. Visitors will be able to interact with these parts to learn about how the internal workings of the vehicle work, such as the engine and differential.

Finally, the 2013 model will have its aerodynamic components shown with the Science Center ’s augmented reality backdrop for visitors to observe and interact with a simulation of the air over the car’s body and wings.

Dr. Daniel Deckler, Ph.D., the team’s faculty advisor and professor of mechanical engineering, said the students have put years of hard work into the cars and are thrilled to see them showcased in a highly visual manner.

“The students on the Zips Racing team are some of the best student engineers in the country and this is a great way to showcase their incredible talents. I’m grateful to the Great Lakes Science Center for including the team and these cars in their latest exhibit,” Dr. Deckler said.

As one of the several student design teams at UA, Zips Racing placed sixth out of 114 teams last year at Formula SAE Michigan in Brooklyn, Mich.: outranking all United States university teams.

Additionally, the College of Engineering at UA is the only American college to have student design teams in Formula, Baja, Human-Powered Vehicle, Concrete Canoe and Robotics place in the top 10 for one respective competition in the 2017-18 season.

“UA’s team was the only one from Ohio to finish in the top 10 in either competition. Overseas, Zips Racing placed 14th overall out of 58 at the Formula Student Germany competition in Hockenheim, Germany,” the press release said.

Previous videos of Zips Racing car unveilings and competitions can be found here.