The candidates running for Undergraduate Student Government President explain their platforms and respond to different questions about UA actions. 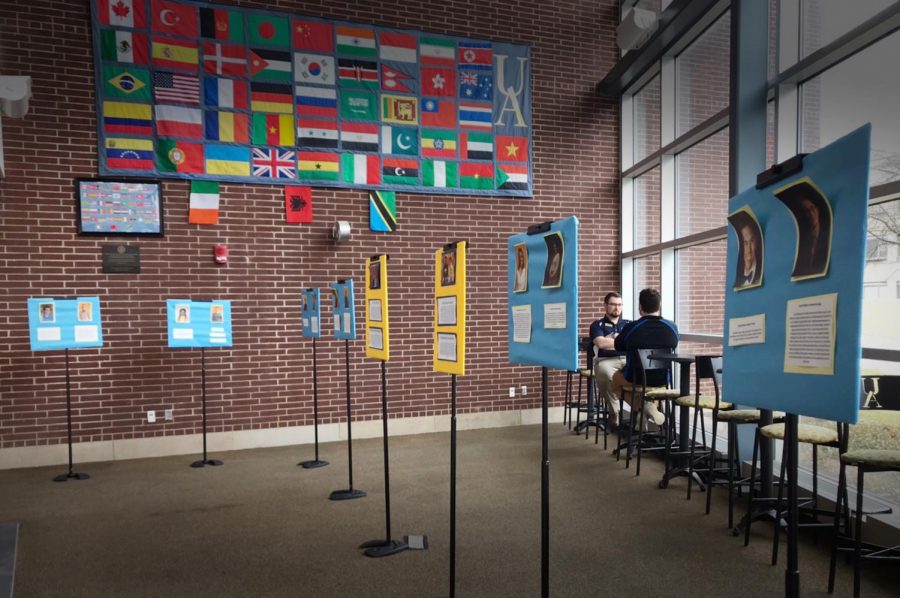 A display of all candidates for various positions in USG stands near the east entrance of Taber Student Union.

One of the requirements for the Presidential and Vice-Presidential candidates is they must have previously served one full, academic semester in an elected or appointed position in USG.

This election season, the candidates for USG President are Kevin Feezel, a political science major and Mark Okocha, a supply chain management major.

Below, the candidates discuss their platforms for USG, as well as answer additional questions regarding recent UA actions and topics important to students.

Q: What is your platform?

A: “Communication: Proactively seek student feedback and bring students in on the decision-making process rather than retroactively explain decisions. Clearly communicate the rationale behind decisions made by USG or UA administration to students. Increase the methods through which USG receives student feedback.

Service: Advocate on behalf of students on University committees. Our distinct communities are one of the strongest aspects of campus- we will prioritize support to strengthen and build up these communities on campus. Student-focused decisions and initiatives to heighten the student voice on campus. Filling our cabinet with diverse people with many different backgrounds and opinions to more effectively serve and advocate for all students on our campus.

Vision: Our vision for UA is a campus where students like us feel empowered and inspired to pursue their passions, one where our voice matters and we have a say in what happens on our campus. Everything we do, in the past, present and future, is to make this vision a reality.

We also plan to address concerns with advising, SpringFest and the cost of textbooks. One issue brought to our attention is when students miss a required class because they were not informed and subsequently have had to delay their graduation. It is simply unacceptable that students are spending thousands of dollars per year and are not told about a required class, causing them to spend thousands more. Another popular concern was student involvement in SpringFest and the disappointment with the format this year. We plan to create a student SpringFest committee to plan and help execute the event. The original purpose of SpringFest was to host a fun event for students and we will return to this by empowering students to plan the event. The rising cost of textbooks is also a popularly held concern by students. USG’s textbook award fund attempts to alleviate the cost of textbooks, but Brittany and I plan to find other solutions such as using free, open source textbooks or cheaper online versions. These issues are incredibly important to students, which is why we will make them our top priority in office.

Q: Why should people vote for Feezel and Hartman?

A: “Kevin and I have spent the last year in leadership working to expand the ways that students can make a change on campus. We genuinely want each student to have their voice heard and valued. We have laid out specific solutions to problems on campus and have many different ideas on how to more frequently and effectively receive student input and feedback for decisions made by USG and UA administration. We plan to prioritize communication and service to students, which will be critical in the coming year with a new president of the university. Our experience, fresh ideas and vision make us the best candidates for Student Body President and Vice President.”

Q: What is your opinion of Five-Star Fridays?

A: “Five-Star Fridays have vastly improved since the initial announcement. Much of the improvement we have seen is thanks to student feedback on what events and programs should be offered. Last semester, USG sent out a survey to students asking for feedback. We got back about 2,700 responses and the data was overwhelmingly in favor of Five-Star Fridays. We were excited to learn that the most popular activities on Fridays include going to labs, finding an internship, and doing community service. USG also learned that nearly half of the students who responded indicated that Five-Star Fridays has decreased the amount of stress in their lives. Kevin and I also recognize that every student’s experience is different, so we plan to continue to seek student feedback and find new ways to ensure every student is benefitting from Five-Star Fridays.”

Q: As you undoubtedly know, the University plans to make $15 million in permanent cuts each year for the next three years. What areas of the University would you propose to be cut?

A: “Kevin and I plan to work very closely with President Green and the future president to ensure that the impact on student’s daily lives is very minimal. Our focus is that students are connected, invested, and inspired to grow. We plan to work with the administration to find innovative and creative ways to boost revenue and increase enrollment in order to decrease the burden of the budget cuts.”

Q: What is your opinion toward President Green pausing the college reorganization?

A: “President Green’s decision to pause the college reorganization allows us to take a crucial step back to understand the impact changes will have on students. While the advertised effects will only be administrative in nature, it is important to consider the unintended consequences and long-term effects on students. If elected, we will use this time to investigate the impact on students. One of President Green’s greatest initiatives during his short time as president is the Three-year Action Plan. The priorities that guide the action plan are student-focused, a plan which earns both mine and Kevin’s support because of these priorities. We plan to assist the administration in whatever way we can to ensure the success of the action plan and to enhance the student experience on campus. The very first priority of the action plan is to ‘increase the success of our students’. We hope to help facilitate this goal of the action plan while also investigating the possible consequences of reorganization in relation to students.”

Q: What actions would you recommend for the University to take in order to increase future enrollment?

A: “At the University Council meeting this past Tuesday, March 12th, Provost Ramsier gave an update on enrollment figures. He said that while applications for the 2019-20 academic year are down 9%, confirmations are up 8%, which is an indication that our applicant pool is better quality and our academic reputation is returning. This is very promising considering that nationwide college enrollment is declining.

In the future, we would recommend the University ensure they are making students the focal point of their marketing. It’s great to share all we have to offer in terms of residence halls and academic programs, but we want to make sure students can feel that, should they choose to come to the University, they will find their place and become a valued member of our UA family.

We recommend that the University continues its’ focus on leading the Northeast Ohio region, where there are so many colleges and universities to choose from and demonstrating why The University of Akron is by far the best.”

Q: What is your platform?

A: “Morgan and I are running our campaign based off of 3 core values and ideals: Transparency, Inclusion, and Community. We believe that in order to effectively serve the students, we must maintain a line of transparency between the student body and administration. By doing this we can make the students part of the decision-making process and keep them engaged and invested. We also believe that The University of Akron falls short in providing an inclusive environment and we want to provide resources and opportunities to those who are underrepresented.  We want to work to create an environment where all students feel safe to be themselves and can express their ideas regardless of their creed, religion or race. By creating a more transparent and inclusive University we can strengthen our community and continue to make Akron a place we can all call home.”

Q: Why should people vote for Okocha and Booker?

A: “There are many reasons why students should vote for Morgan and I. We have spent our time at The University of Akron engaged in a variety of roles and organizations. We have each been a member of various groups on campus from Black Excellence commission, Esports, College Democrats, Fencing Club, Undergraduate Student Government, Greek life and many more.  We have also held a variety of leadership positions on campus and worked to better the University through our various roles in Undergraduate Student Government. But the most important things for us is that we want to represent and elevate the student voice. There is no University without the students and we want everyone to remember that. The student voice has been silenced and ignored for so long. We will go above and beyond in representing the student body and making sure that its voice is heard and respected.”

Q: What is your opinion of Five-Star Fridays?

A: “Five-star Fridays were a good idea in theory. They allowed students to have an extra day to participate in internships and work as well as to go to the various Five-Star Fridays events held by the University. We were all told that the various resources on campus would not be changed or reduced. Now, hours of operation for the different places on campus to get food have been reduced and the library closes earlier. We feel that the student body has been somewhat deceived and that more and more of our resources will be removed due to decreased traffic. It is unfair to tell students nothing will change and then take away the resources we need. It is another example of how the student voice is being ignored and underappreciated. Morgan and I will strive to bring back what has been taken from us and to represent those on campus who live here and need the library and food. As well as those who work at these places and are now losing their hours and pay that they need.”

Q: As you undoubtedly know, the University plans to make $15 million in permanent cuts each year for the next three years. What areas of the university would you propose to be cut?

A: “ We have seen drastic cuts in the last year and its effect on how efficiently the University runs. More cuts, although necessary, will further hinder the operations of the school. We are happy to see how the University has invested in ways to bring in more money, such as the Esports program and renting or selling property the University owns. We feel like investments in areas like Alumni outreach will bring in more money and decrease the amount of cuts needed to be made to the budget.”

Q: What is your opinion toward President Green pausing the college reorganization?

A: “The reorganization of the colleges will allow the University to run more efficiently on a decreased budget. I support President Green’s idea to pause the reorganization. It will allow for more thought and planning to go into the decision making process. It will also let the new president have input in how that reorganization will work. I hope that those involved in reorganizing the colleges will be open and transparent with the student body on the process. As well as allow for student opinion and feedback.”

Q: What actions would you recommend for the University to take in order to increase future enrollment?