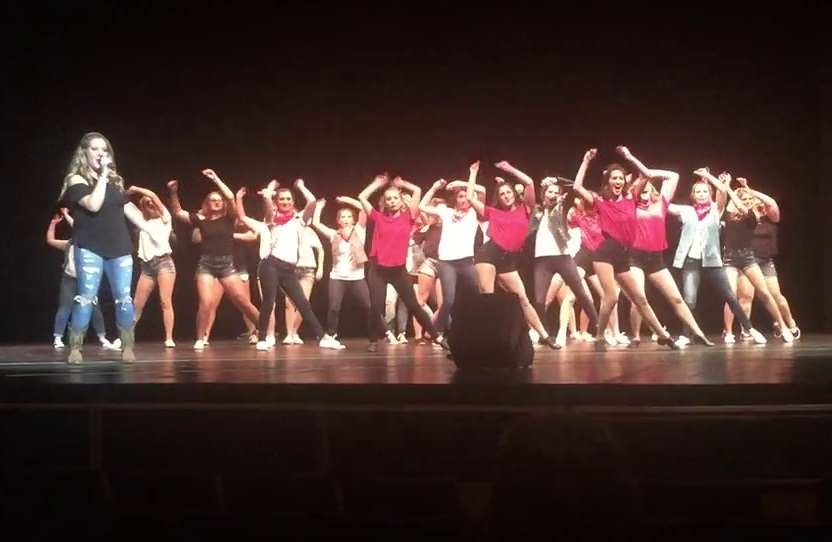 The ladies of Alpha Gamma Delta perform "Footloose" on stage during Songfest 2017.

Since 1933, the fraternity and sorority community at The University of Akron has played a role in putting on annual performances with a certain theme while also raising money for charitable causes.

According to UA events, this year’s Songfest will follow the theme, “A Red Carpet Affair,” featuring live, philanthropic performances showcasing various soundtracks from some of Hollywood’s greatest movie hits.

Each Songfest involves groups of UA students working together in order to prepare routines in which they dance, sing and act out various scenes on stage. There are 16 fraternities and 8 sororities at UA, whose memberships account for approximately 800 UA students.

Dedicated to the upholding of various traditions that are mixed in with the history of the University, these groups will come together for the 86th Songfest this Sunday at E.J. Thomas Hall at 3:00 p.m.

Last year, Songfest had been on tour in its quest to raise as much money for charity as possible, featuring many fundraisers at popular restaurants near campus, such as Chipotle and Penn Station, and a Twitter account through which the organizations had kept followers updated on news regarding the fundraisers and Songfest itself, ultimately leading to one of their most successful turnouts yet.

All proceeds from this year’s installment of the Broadway-style event will benefit the Ohio chapter of Camp Quality, a national summer camp for children.

“Letting kids with cancer be kids again,” Camp Quality is dedicated to helping children affected by cancer, and their families, cope with the emotional hardships involved with battling the illness in its various forms with the help of friendly and knowledgeable staff who can accommodate each child’s individual needs, making for the best and most joyful experience alongside other children who face similar challenges. The organization was awarded the 4-Star Award from Charity Navigator.

Camp Quality has been the beneficiary of Songfest for many years and will benefit from this year’s event as well. The Buchtelite reported in 2016 that Songfest had raised $6,845 for the same charity on April 13th of that year.