Akron Against Cancer to Host Annual Relay For Life

Akron Against Cancer is leading to fight for the University and greater Akron communities against cancer by raising funds and awareness for the American Cancer Society. 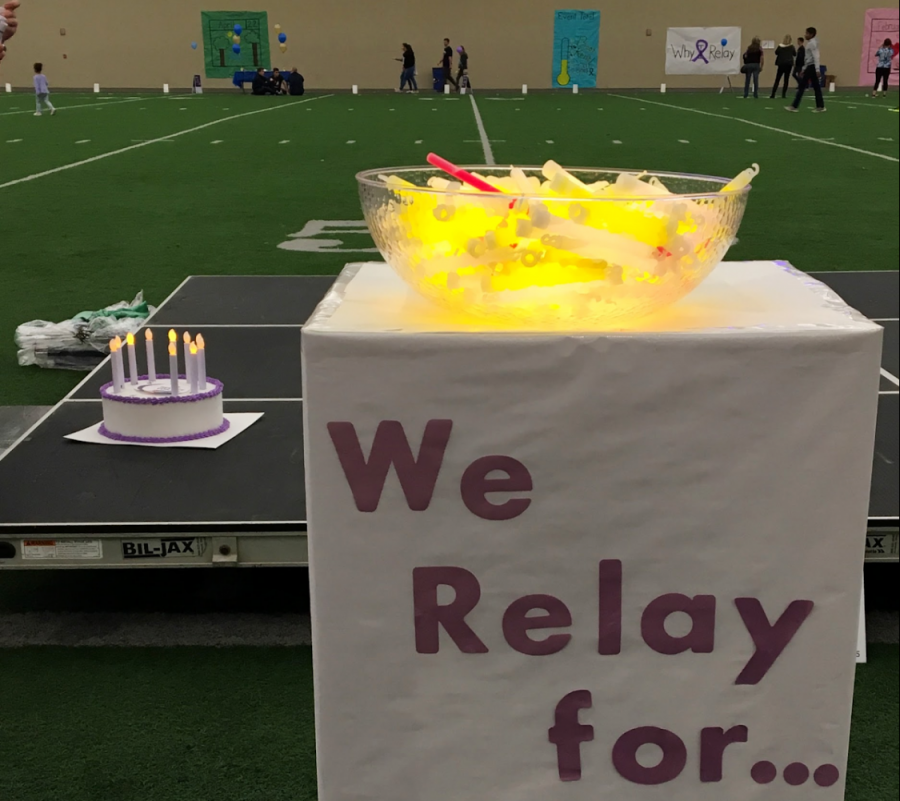 After finishing the Luminaria Ceremony lap at the 2018 Relay For Life, participants add glow sticks to the "We Relay for..." bowl.

As a crowd holding glow sticks sits and listens to an Akron Against Cancer representative speak on stage, relationships between immediate family, extended family and friends are read.

Each time the representative reads a different title, such as mother, father or friend, another glow stick cracks and creates a beacon of light within the darkened Stile Athletics Field House. One who watches the event gets to experience the lighting of close to 400 glow sticks. Though witnessing this glow is beautiful, each glow stick represents someone who has been impacted by cancer.

According to the American Cancer Society, there will be an estimated 1,762,450 new cases of cancer in 2019.

The University of Akron student organization Akron Against Cancer plans the Relay For Life event every spring where a Luminaria Ceremony, like the one described, takes place.

Akron Against Cancer partners with the American Cancer Society to raise funds and awareness and is Akron’s chapter of Colleges Against Cancer.

Alya Zerbe, who has worked for the American Cancer Society for nine years and volunteered for six years prior, said students working together creates an impact.

“It’s always amazing to watch with a collegiate Relay because it doesn’t matter what brought you to the event, during the Luminaria Ceremony, you can see that as The University of Akron, we are coming together for something bigger,” Zerbe said.

The goal of the organization is to raise money and awareness for the American Cancer Society while advancing its mission of saving lives, celebrating lives and leading the fight against cancer.

According to Cancer.org, “Relay events last anywhere from six to 24 hours with teams of survivors, caregivers and supporters taking turns walking around a track or designated path.”

Zerbe said that the donations that are received allow the American Cancer Society to help around to 1 million people touched by cancer each year. Cancer information specialists are able to answer questions, provide resources and provide information 24 hours a day, seven days a week via their telephone line, 1-800-227-2345, email address and live online chat on cancer.org.

“We also help patients and their families with their most pressing needs: getting rides to treatment, navigating the healthcare system, dealing with the side effects of treatment and providing overnight stays when treatment may not be close to home,” Zerbe said.

One example is that a donation of $500 could give a cancer patient and caregiver traveling far from home for treatment up to “five nights of free lodging at an American Cancer Society Hope Lodge,” Zerbe said.

Last year, UA’s Relay For Life event had approximately 400 students and community members combined, in attendance. Through fundraisers, activities and donations, Akron Against Cancer was able to raise over $44,000 for the American Cancer Society.

Each year, the event has a different theme, allowing teams to be creative in the activities they offer at their tables.

The 2018 holiday-themed event included activities, performances by UA groups, food vendors and a survivor dinner. This event is held to celebrate those who are continuing to fight and honor those who have lost the fight to cancer.

“I had a lot of fun being involved with the Phi Delta Epsilon team last year,” sophomore Noah Parker said. “I walked around the track, worked our table and participated in the minute-to-win-it activities. My favorite game we participated in was the frozen t-shirt contest, which we actually won.”

This year’s event is on April 27, from 3 p.m. to midnight at the Stile Athletics Field House.

According to senior Stephen Conklin, president of Akron Against Cancer, people will be able to participate in games and activities in the field house. Food and raffle prizes will also be available.

Survivors are invited to participate at the event, as there will be a dinner for survivors and their caregivers along with a special lap around the track for survivors.

Conklin said the event has meant a lot to him since first getting involved with it in high school because he has personal experience with someone being diagnosed with cancer.

“One of my best friends from high school was diagnosed with cancer in October of 2017, and he continues to be one of my biggest points of motivation,” Conklin said. “Cancer affects everyone, it doesn’t play favorites and it doesn’t discriminate, but together, we can provide hope for those that are battling this terrible disease, and one day, beat it for good.”

Any questions about the event or how to get involved can be directed to the Akron Against Cancer organization at [email protected]. Students can sign up for the event here.