As Matthew Wilson prepares to leave Akron for a new career in St. Joseph, Missouri, he discusses his contributions to the law school and University as a whole. 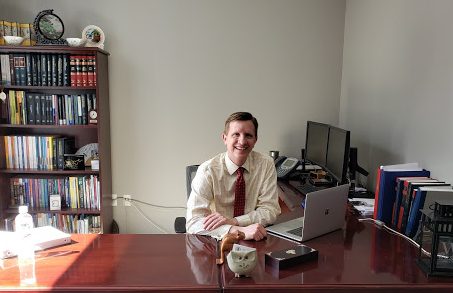 Former President Matthew Wilson hopes his success at The University of Akron will influence his career at Missouri Western State University.

As The University of Akron currently searches for its fourth leader since 2014, a former UA president has been chosen as the fifth president for Missouri Western State University.

Through a 5-0 vote by MWSU’s Board of Governors on March 12, Matthew Wilson will begin his new journey as president in St. Joseph, Missouri on July 1, 2019, according to an MWSU press release.

Wilson and his wife, Noriko, visited the campus through a formal announcement press conference held on March 18. Wilson said the MWSU community is excited for “some new energy” after hearing of his UA contributions.

Even though Wilson is excited to be starting this new portion of his career, he said he will always remember his time here at Akron and the contributions he made to improve the student experience.

At the end of this academic year, Wilson will have been at UA for a total of five years. However, before becoming president of the University, Wilson served as dean of The University of Akron School of Law from 2014 to 2016.

“What brought me to UA initially was the deanship here at Akron Law,” Wilson said. “I loved the community when I came in and interacted with folks. So I had a really favorable impression of Akron and it lined up with my professional background.”

One of Wilson’s initial plans for the law school was to increase applications and enrollment by bringing students and faculty together for a common purpose.

There were challenges to getting everyone to see the same “strategic vision or a strategic plan,” Wilson said, but the results of bringing people together made everything worthwhile.

From the new strategic vision, Wilson and the law school were able to build a new, distinctive study abroad program that has become a huge component in attracting potential students.

This new program gave law students the opportunity to travel to two countries for four weeks, where they would visit the country’s supreme courts, observe court proceedings and more in addition to the course, Wilson said.

Other changes Wilson was able to implement for the law school include a two-year Juris Doctorate degree for international students, a human rights and immigration clinic, as well as several hands-on opportunities for students.

Also during Wilson’s time as dean, the law school received several awards and recognitions on a national level, according to Wilson’s UA presidential biography.

Nonetheless, two of Wilson’s bigger contributions as dean of the law school were leading the debt-free, $21 million renovation of the C. Blake McDowell Law Center and helping to increase class sizes by around 40 percent.

“So unlike many of the other buildings that were built on credit, there is absolutely no debt on this,” Wilson said. “That’s a great thing because it is probably one of the nicer buildings in the region for law school.”

Then, on Oct. 19, 2016, the UA Board of Trustees elected Wilson as the 17th president of the University, as he had already served three months as interim president, his biography said.

For Wilson, holding such a high position at the University was “truly a humbling honor.” Meanwhile, he said improving the student experience was the main reason he accepted the position.

“I think my favorite part of being president and hopefully the place where I made contributions was on the individual level with students,” Wilson said. “If I think about making an impact, that’s something that means a lot.”

Some of Wilson’s early contributions as President of UA include the $20 million scholarship campaign “Making a Difference & Moving Forward” and the Akron Guarantee Scholarship.

According to a UA webpage, the AGS “guarantees the yearly renewal of your scholarship so long as you are in good academic standing, and it also offers even greater financial support through automatic yearly upgrades.”

One example of how this scholarship grows is that once a student has completed 30 credit hours, the scholarship amount increases by $1,500, an article from the Akron Beacon Journal said.

Wilson also said he was able to aide in the repair of the University’s budget, which was expected to lose over $60 million in two years. However, the University actually saved $10 million.

Before stepping down from president and returning to the law school at the end of the Spring 2018 semester, Wilson implemented two more large ideas to UA: Five-Star Fridays and Esports.

According to another article from the Akron Beacon Journal, the University eliminated most classes on Fridays and encouraged students to use the new free time for work, homework and additional opportunities on and off campus.

Wilson said several students have contacted him about the positive impact having no classes on Friday’s has had on their college careers. One student who contacted Wilson was able to get an important internship.

“That was really the focus of Five-Star Fridays, to provide the students with that opportunity to go out and make the world a better place,” Wilson said.

As for Esports at UA, the competitive video gaming program has received national attention and membership has grown to around 1,000 actively participating students, Wilson said.

Justin Banusing from ESPN wrote an article about the implementation of this new program for the Fall 2018 semester and how Akron was one of few Ohio universities to offer the program at a varsity level.

Beyond the entertainment aspect of video games, Wilson said Esports is important because of the applications to medical training or education as the human brain remembers things done actively.

As the University moves forward with discussions of reorganization, budgets and the presidential search, Wilson said his main piece of advice would be to keep the benefits of the students in mind.

Wilson said he believes that the main reason people are in education is to help students reach their full potential in order to go forward and do great things in life.

“Because that’s why we’re in education… to make sure students get the knowledge that they need,” Wilson said. “So that way when they go into the workplace, they are able to get satisfying and fulfilling careers.”

For students, Wilson’s advice for them continuing their career at UA is to keep going even if things get rough and to never be afraid to ask for help.

“My advice to students is to never give up and never doubt yourself. Always have faith and understand that the people who are here are here to assist. So never hesitate to seek guidance or assistance,” Wilson said.

The Buchtelite would like to thank Wilson for all of his contributions to The University of Akron and wishes him the best as he leaves for the start of his new presidency at Missouri Western State University.