“Out of Silence” Coming to UA 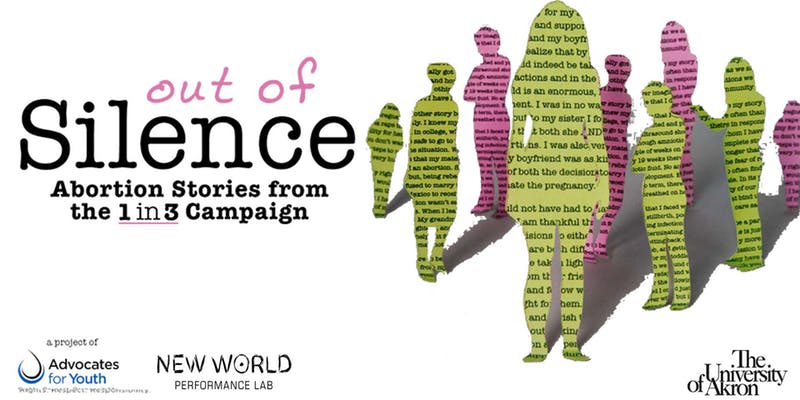 The University of Akron School of Dance, Theatre and Arts Administration and the New World Performance Lab are partnering to present Out of Silence: Abortion Stories from the 1 in 3 Campaign on May 2-4 at 7:30 p.m. each night at Guzzetta Hall.

According to a University webpage, Out of Silence is a series of short stories written by women who are exploring the obstacles people may experience with the possibility of abortion.

Tessa Gaffney, a graduate assistant in the School of Dance, Theatre and Arts Administration, is participating in the event and said it is part of a larger project aimed at education.

“The production is part of a national project which is attempting to educate youth and young adults about the issues surrounding abortion in order to stimulate a new dialogue, rooted in honesty and empathy,” Gaffney said.

Out of Silence will feature short plays written by women and performed by UA student-actors; and is directed by Jamie Hale, Rosilyn Jentner and Debora Totti. All three women are members of the New World Performance Lab.

“The purpose of this event is simply to share women’s experiences,” Gaffney said.

During the performance, audience members will have the opportunity to share their views and beliefs on the subject in a community forum, along with listening to stories that attempt to challenge the current views toward abortion.

“There will be open discussions after each performance between the audience, the cast and pro-choice organizations, in which everyone will be welcome to share their point of view in a community forum,” Gaffney said.

Tickets for Out of Silence: Abortion Stories can be found on Eventbrite and are $10 for general admission and $5 for students.