The University’s search for leadership ended Aug. 14 with the current Chancellor at the University of Wisconsin – Green Bay. 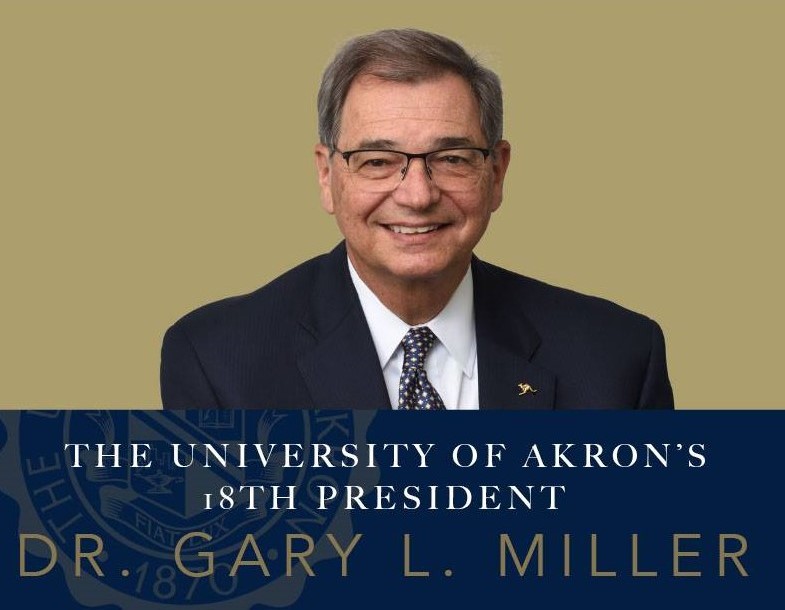 President-elect Gary L. Miller thanks those who participated in the search process for trusting him to lead The University of Akron.

After a unanimous decision at the Aug. 14 Board of Trustees meeting, Gary L. Miller, Ph.D., has been named the 18th President of The University of Akron.

President-elect Miller, 65, is currently Chancellor at the University of Wisconsin – Green Bay and will assume his duties at UA on Oct. 1, 2019.

Along with the excitement of being at a new University, Miller and his wife, Georgia, are thankful the University and community have given them the opportunity to help lead UA to a bright future.

“Georgia and I are absolutely delighted to be here,” Miller said. “We are extremely excited to accept this position offered to us by the Board of Trustees at The University of Akron.”

Board Chair Joseph M. Gingo said in a UA press release that the BOT believes Miller is the best person out of the candidates considered to lead the University with his experience in higher education.

“He brings not only two decades of senior-level higher education leadership, but also first-hand experience as a member of the teaching faculty and as a researcher,” Gingo said.

Miller and Georgia will be in the Student Union Ballroom on Aug. 15 from 10 to 11:30 a.m. to meet and chat with students. Meeting UA students is one of the things Miller and Georgia are most excited about during the transition.

“We want to introduce ourselves, keep on a first name basis and get to know them because we’ll be able to have relationships with them forever,” Georgia said.

Miller went on to say university students in today’s society impress him for several reasons, including their skepticism of information they receive and questions they ask.

“One of the best things about this, these kinds of jobs, is being with students,” Miller said. “We never turn down a meeting with a student in the President’s office.”

UA’s search for the 18 President began when Matthew Wilson, who held the position for two years after Scott Scarborough, stepped down to rejoin the faculty of the School of Law on July 31, 2018.

One reason behind the importance of this presidential search is it resulted in the University choosing its fourth leader since 2014; after a mutual agreement between the BOT and Scarborough to end his presidency.

Green has agreed to act as special assistant to Miller for strategy and transition from Oct. 1 until Jan. 31, 2020. Green will also retain his titles as director of the Ray C. Bliss Institute of Applied Politics and distinguished professor of political science.

Another important factor in this presidential search is how the BOT chose to keep the process confidential for the first time in the history of The University of Akron.

In an update sent to the campus community on Nov. 28, 2018, the BOT only thought of a confidential search to “ensure consideration of the best possible group of potential presidents…”

However, a final decision was made a week later when the BOT approved revisions to the search process to include leaders of constituency groups and confidentiality agreements.

“We had very qualified individuals and we came down to the one that we think is the most qualified,” Gingo said. “We are just delighted that Dr. Miller did accept our offer to become the 18th president of the University.”

Gingo later said there was no denying that the closed search process “attracted a totally different pool of candidates than an open search.”

According to the UA press release, Miller started his role as Chancellor of the University of Wisconsin – Green Bay since 2014 and has several additional administrative credentials.

With a doctorate in biological sciences from Mississippi State University, Miller also co-authored a widely used textbook while serving as a professor and chair of the University of Mississippi Biology Department.

During the press conference after the unanimous decision, Miller thanked all those involved in the presidential search process as he has been impressed by their commitment to the future of the University.

“What most impressed me was this deep sense of optimism and I share this optimism,” Miller said. “And it’s not optimism that’s born from the joy of an occasion like this, but it’s optimism I think that’s well placed.”

“We will engage in intensive conversations with each other,” Miller said. “And we’ll do our best together with you, this Board and this community to make this university even better.”

The Buchtelite would like to congratulate President-elect Miller and Georgia as they begin their journey at The University of Akron. We wish them the best through their transition to Akron.

The Buchtelite will offer continuing coverage of campus responses and reactions to the selection of the new president.