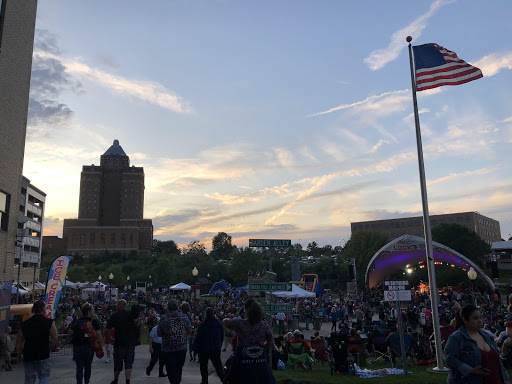 Eager customers explore the park on the first night of Pizza Fest at Lock 3.

According to the Pizza Fest website, the three-day food and music festival featured several different pizza parlors from the Akron area that sold both individual slices and whole pizzas as a way for the community to try different local pizza options.

Guests had the opportunity to participate in pizza eating contests on Saturday and Sunday, with an entry fee of $12. Proceeds from each contest were given to the Akron Children’s Museum.

Richard Perk, managing partner of Pizza Fest, said the overall goal of the fest was to produce attraction to Downtown Akron and highlight the culinary options in the area.

“We wanted guests to be able to purchase sample slices from various pizza places throughout Northeast Ohio,” Perk said. Perk estimated about 12,000 people attended throughout the entire weekend.

Akron native Crystal Starcher, 24, attended Pizza Fest on Saturday with her husband and her parents. After a few slices of pizza and fun with her family, Starcher said they plan on making the fest a family tradition each year.

“It was really nice to get out as a whole family and enjoy the beautiful weather and wonderful food,” Starcher said.

Starcher and her family tried pizza from Scott’s Fire & Ice, Dewey’s Upper Crust and DiLauro’s Pizzeria. But when it came time to cast their vote on a favorite local shop, Starcher said Dewey’s won because of the hand-tossed pizza dough.

Tess Barsody, a Dewey’s employee, said getting to know the market in Akron and introducing the community to their pizza was one of the main goals the shop had in participating at Pizza Fest.

“One of my favorite parts of Pizza Fest was seeing how many people haven’t heard of us and getting to introduce ourselves to the community,” said Barsody.

Another part of Pizza Fest that Barsody enjoyed was listening to the Queen tribute band that performed Saturday night, Simply Queen.

Simply Queen was one of nine music groups to perform throughout the weekend, according to the Pizza Fest website. Other headlining acts included the Rush tribute band Lotus Land on Friday and The Mighty Smithtones on Sunday.

“The Pizza Fest was a fun family event with live music from local artists, multiple local pizza shops to choose from and a few dessert trucks,” Starcher said.

Planning for next year’s Pizza Fest are currently underway, according to Perk, as there are hopes for the event to gather more vendors and larger crowds.