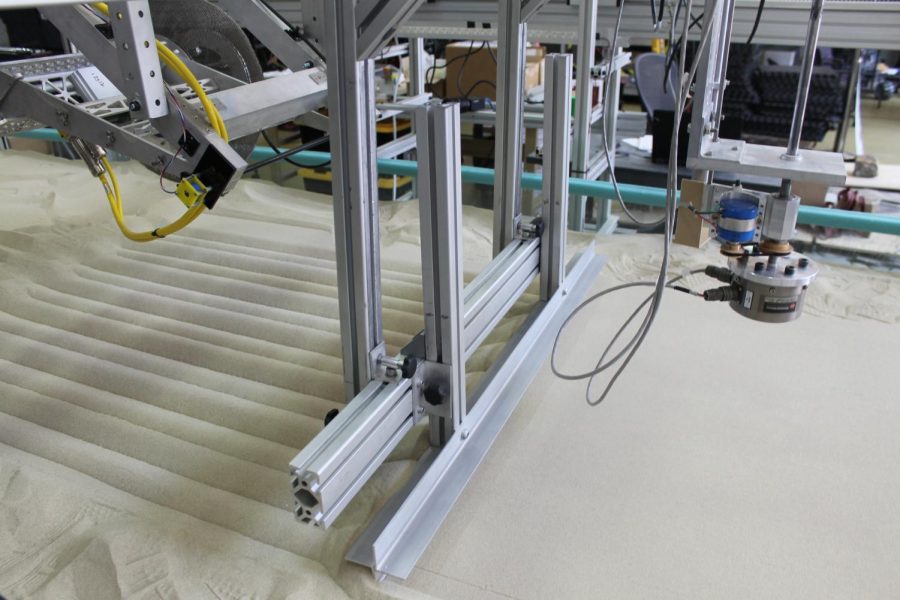 A potential Martian soil simulant at Carnegie Mellon University’s Robotics Institute is being prepared for a soil strength test, or a bevemeter test, in a rolling wheel dynamometer to measure its mechanical properties.

The National Aeronautics and Space Administration (NASA) is currently counting down the days until another trip to Mars in 2020 with plans to send a new and improved rover to collect soil samples.

Space travel is often related back to astronauts and spaceships, but people often forget all of the little things that make space exploration possible; such as the tires on a rover.

Heather Oravec, Ph.D., a mechanical engineering research associate professor at UA, is now researching terrain requirements of Mars with the Surface Mobility Team at NASA’s Glenn Research Center in Cleveland for the 2020 mission.

Research from Oravec and the Surface Mobility Team will influence the new design for future rover tires to improve maneuverability on the surface of Mars, as rovers getting stuck has been a problem for NASA in past missions.

In a UA press release, Oravec said creating soil for Mars with no previous samples from the planet to learn from will be one of the main challenges when testing new rover tire designs on simulated Martian terrain.

“So even though we don’t have any actual Martian soil samples to learn from, there is plenty of other information that we have collected over the years,” Oravec said. “We take what we have learned from these past experiences and start our design from there.”

Testing these new tires will involve mixing different kinds of soil from Earth in order to potentially mimic Mars soil; which is widely described as similar to dry desert sands, and running the rovers over the terrain to see how the tires perform.

New rover tires will need to be airless as a way to reduce mass and increase active performance in order to outlive prior tire designs from previous missions.

According to NASA’s website, the mission is scheduled to launch between July 17 and Aug. 5 of 2020 from Florida’s Cape Canaveral Airforce Station. The new rover will land near the Jezero Crater and remain on the Red Planet to collect soil samples for one Mars year, about 687 Earth days.

“There is so much we can learn from having actual Martian soil samples here on Earth that it is extremely important for the future of space exploration that this mission succeed,” Oravec said.