Changes Made to Roo Express Shuttle Routes for Fall Semester

Parking and Transportation Services has changed the shuttle’s routes by combining them into one circulatory route around campus. 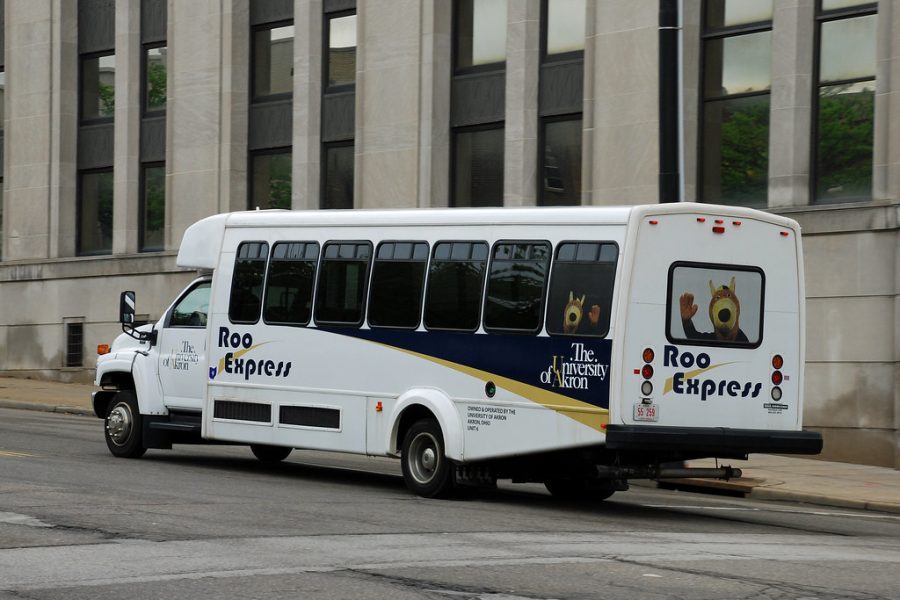 The Roo Express used to be comprised of three routes that have been combined to create the Campus Circulator route.

Parking and Transportation Services at The University of Akron has changed the route of the Roo Express, a free shuttle for students on campus, from several routes to one circulatory route for the Fall 2019 semester.

In past semesters, the Roo Express had three routes: the Polsky Express, East Route, and South Route. Each was set to run between its predetermined destinations, reaching each location about every ten minutes.

The new route will stop at most of the same locations, but combine all three routes into one single circulatory route called the Campus Circulator.

One goal of combining the routes is to eliminate backtracking and the need for riders to transfer buses.

“We are excited for the additional benefits that a consolidated loop route will provide, with faster, direct connections for riders,” Jared Coleman, Director of Parking and Transportation Services, said.

However, some students have mixed feelings about the new changes due to longer ride times and the elimination of some destinations previously included in the old routes.

“It’s cool to be able to hop on one bus to get to any hotspot on campus,” Mitaya Collins, a junior majoring in Anthropology and Psychology, said. “But I can’t stand the 30 minutes it takes just to get back home.”

Another change made by Parking and Transportation Services this semester is the elimination of the late-night Downtown Route, which had very few riders according to last year’s data.

Additionally, small adjustments to the hours of operation for the Roo Express have been made for weekend services.

The free Downtown Akron Shuttle (DASH) will continue to run its regular route this fall, connecting main campus with the Polsky Building. DASH also stops at several other locations on campus and downtown.

“Student feedback is also a vital part of the review process,” Coleman said. “So we share significant changes with student-body representatives in Undergraduate Student Government and they help us to hear from students who have not reached out to us directly.”

Students with questions or concerns regarding these new changes can contact Parking and Transportation services via email at [email protected] or by phone at 330-972-7213.