As part of the non-board members on the presidential search committee, these constituency group leaders share similar feelings. 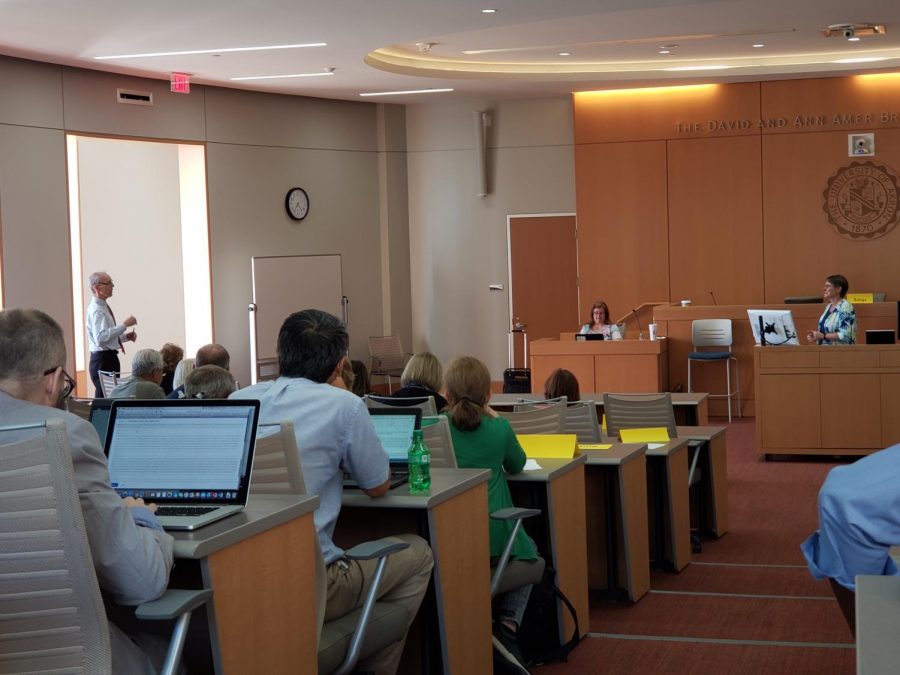 Faculty Senate at The University of Akron held their first meeting of the 2019-20 academic year in a new campus location.

Editors Note: The Buchtelite will provide an additional article on students’ response to these topics.

Leaders from two key constituency groups on campus, Faculty Senate and the Akron-AAUP, share their responses to the recent changes at The University of Akron.

According to the online Merriam-Webster dictionary, constituency groups are the bodies of people with the ability to elect a representative.

At UA, Faculty Senate and the Akron Chapter of the American Association of University Professors were two of the groups that had representation on the presidential search committee.

Prior to the start of the Fall 2019 semester, the Board of Trustees unanimously selected Gary L. Miller, Ph.D., as the 18th President of the University: the fourth in four years.

While the process had been confidential, a first in the history of the University, the search committee had been expanded to include six elected leaders of different constituency groups as non-board members.

At first, the idea of having a closed search process and several confidentiality agreements concerned members of Akron-AAUP and Faculty Senate.

Dr. Pamela Schulze, President of the Akron-AAUP, said while members agreed having faculty representation in the process was a positive aspect, they were still concerned about the lack of transparency.

“The members expressed the view that a public university should strive to have more transparency,” Schulze said. “I think that opinion has merit.”

Dr. Linda Saliga, Chair of Faculty Senate, said her initial reaction had been similar to those of Akron-AAUP as there was worry of the BOT pushing out input from faculty representatives.

However, once the plan for the search had been explained and the process started, Saliga said Faculty Senate “realized that faculty might have more input with this process.”

One way faculty input was taken into consideration during the search process had been through a survey conducted by Akron-AAUP on the qualities needed in the new president.

A few of the key qualities highly ranked in the survey include: demonstrates respect for faculty, evidence of high integrity, accepts responsibility/accountability and experience in higher education.

President-Elect Miller meets several of the qualities requested by faculty as he not only was a tenured professor with a background in research, but has also held several positions at different university administration levels.

“He has had to work with shared governance processes and various constituency groups both within and outside universities,” Schulze said. “I’m pleased that we found a candidate who possesses those qualifications.”

Once President-Elect Miller takes office on Oct. 1, both constituency groups have advice on where large efforts to improve the future of the University should be made.

An issue the Akron-AAUP feels needs attention is the faculty morale as concerns continue to rise about shared governance at UA, workplace climate, culture and overall workload.

In terms of Faculty Senate, Saliga hopes President-Elect Miller will evaluate all UA administrators in terms of performance and skill sets in order to best decide what changes need to occur for the progress of the University.

Nonetheless, Schulze wants the campus community to know that students are the reason why the University is here and that they will always be the primary focus of faculty members.

“I just want the students and entire UA community to know that Akron-AAUP is working hard to engage the administration in a constructive way to ensure that all our students in every program get the best quality education possible,” Schulze said.