The innovative steel pannist, his bassist and his drummer came to BLU Jazz+ on Sept. 14. 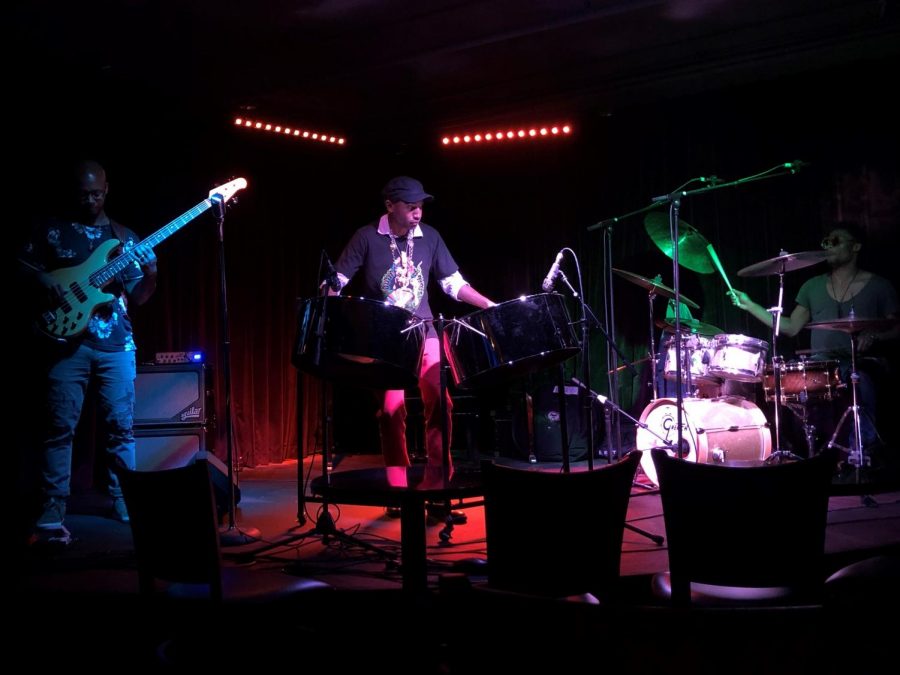 To celebrate his 35th birthday, Jonathan Scales and his Fourchestra made a last-minute stop at BLU Jazz+ on Market Street in Akron, their self-proclaimed “favorite city in Ohio,” on Sept. 14.

Scales describes his music as a complex blend of jazz and steel pan elements as well as unique rhythmic patterns. His band is comprised of himself on steel pans, E’Lon JD on bass and Maison Guidry on the drums.

A staple of the Fourchestra’s live performances includes Scales leading the audience in counting the groups of beats throughout the song “Mind Your 3’s and 2’s,” which uses a non-traditional meter, or the rhythmic pattern of the bars of music.

The Fourchestra is known for their unique approach toward both meter and percussion. Throughout the night, Scales could be seen and heard playing the sides and rim of his steel pans to create metallic clanks rather than striking the notes on the instrument.

“We all play our own instruments in a non-traditional way on stage together, and we hope you enjoy it,” Scales said during the performance.

Several students from The University of Akron first encountered Scales and his Fourchestra at the Percussive Arts Society International Convention three years ago. Scales also visited UA’s School of Music in February for a private concert just for the percussion studio.

Senior John Zazo, a percussion performance major, said that the non-traditional aspects of the Fourchestra’s music is one of the best parts of seeing them perform.

“I like seeing all the different styles,” Zazo said. “They all come from very different backgrounds and it’s interesting to see what they do together.”

This combination of musical styles brings a complexity that senior Marie Conti, a percussion performance and music education major, believes is the appealing factor of Scales and his Fourchestra.

Scales’ musical complexity is showcased in his song “Cry,” which features a 32-bar steel pans melody that remains constant throughout the gradual build of the drums and bass guitar.

“It represents how a person tries to keep it together while going through hard times and how that sort of builds into something that eventually explodes,” Scales said before the song started.

The night ended with a performance of “We Came Through the Storm,” where Scales invited all audience members to come on stage or as close as they would like to watch how the artists perform.

“It’s a unique experience that’s not like ‘mainstream’ music, but it is interesting enough that you should definitely listen to it at least once,” Conti said.

In addition to their last-minute visit to Akron, the band also released a surprise album called “Mindstate Music” on the same day. The album features a full steel drum orchestra and can be found on all streaming platforms.