Journalism and media professionals, as well as students and visitors, gathered for a workshop on ethical media coverage of activism and advocacy. 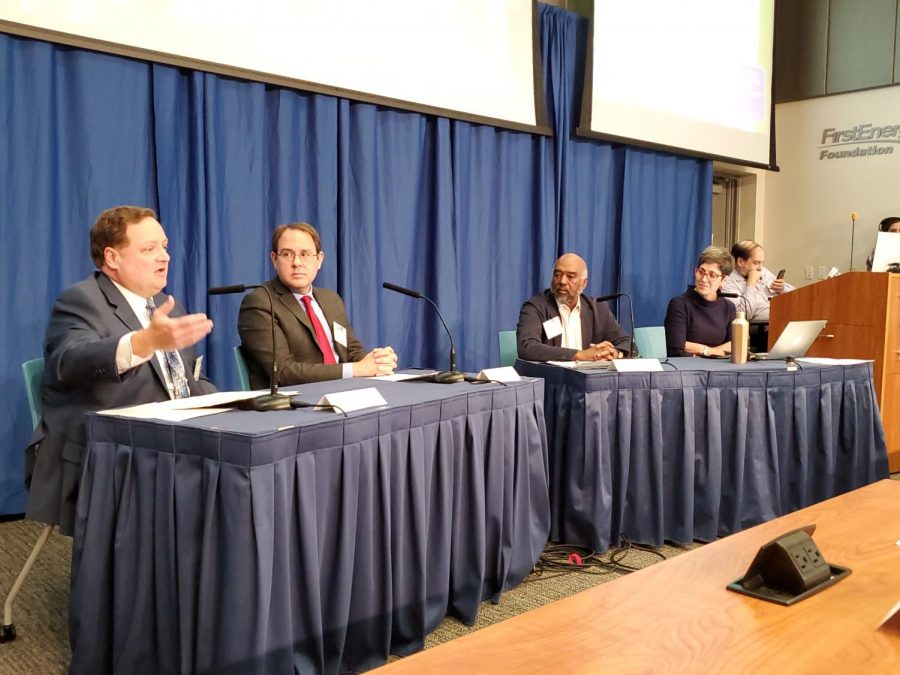 Journalism and media professionals joined with students from The University of Akron and Kent State University for the 15th annual Poynter KSU Media Ethics Workshop on Sept. 19 for discussions on ethics in activism and advocacy.

Hosted by the Poynter Institute in partnership with KSU, the all-day workshop titled “Act. Action. Activism?” involved several guest speakers and panels of media professionals there to share their expertise with students and guests.

Jan Leach, Director of the Media Law Center for Ethics and Access and professor at KSU, coordinates the workshop each year.

This year, the focus was based on the growing importance of activism and ethics as future professionals will eventually face ethical dilemmas when covering political movements, protests and other controversial topics.

Kelly McBride, Vice President of the Poynter Institute and chair of the Craig Newmark Center for Journalism and Ethics at Poynter, said journalism can be a form of activism during her introduction to the workshop.

“The most significant journalism is activism,” McBride said. “Journalists have to be activists when the time is right.”

Her opinion on the topic had been debated throughout the day as more media professionals shared their stories and viewpoints on best ethical practices when activism may be present.

The first guest speaker was Howard Ruffner, photographer and author of his new book “Moments of Truth-A Photographer’s Experience at Kent State 1970.”

Ruffner gave his first-hand account of the events of May 4, 1970 at KSU, when the Ohio National Guard opened fire on a group of students peacefully protesting on campus. From his experiences that day, Ruffner learned and shared the importance of empathy in media coverage.

Hired by Life magazine, Ruffner was asked to photograph events on Kent’s campus involving student protests. In doing so, he captured images of the moment members of the National Guard opened fire on unarmed students.

“Photographs are moments of truth and you don’t have to advocate when the photos are speaking for you,” Ruffner said.

Crutchfield was the former president and publisher of the Akron Beacon Journal; Manatos is an Emmy Award winning journalist, as well as president and founder of Laura Evans Media.

Painter is an assistant professor of communication at the University of Dayton; Shearer is the current editor of the Akron Beacon Journal.

Lead by McBride, the panel included four media professionals from around the country discussing the overlap of journalism and activism and their views on modern issues in the media.

Later in the workshop, McBride led a Q&A with Melissa Falkowski and Eric Garner, teachers from Marjory Stoneman Douglas High School in Parkland, Fla. who saved over 60 students during last year’s tragedy.

First, Falkowski and Garner shared their accounts of how Feb. 14, 2018 went from their point of view. Then, they discussed the work their journalism and broadcast journalism students did to empathetically and ethically cover the event and remember the victims.

As the advisor of The Eagle Eye, the school’s newspaper, Falkowski said she supported any decision her students made in terms of covering the event. One of these key decisions had been to focus on the victims rather than the shooter.

Garner and his students made a short documentary on the days following the incident and how the school began to heal, as well as rebuild.

Overall, the workshop included several noteworthy guests and educational panels aimed at teaching all guests different ethical ways to practice journalism and activism as one.

Sponsors for the workshop included the Poynter Institute, KSU’s College of Communication and Information, the Akron Beacon Journal, the Akron chapter of the Public Relations Society of America and others.