Jared Coleman, Director of Parking and Transportation Services at UA, has some helpful suggestions for students unfamiliar with the new route. 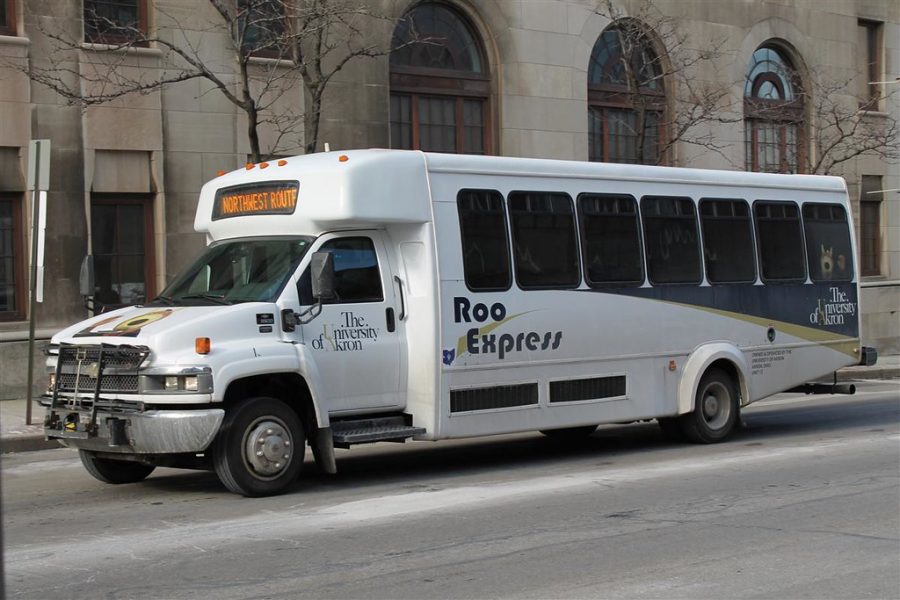 Some students have been skeptical of the decision to switch the Roo Express from three shuttle routes to one loop.

Students at The University of Akron are adjusting to the recent changes made to the Roo Express, a free shuttle around campus, and the route in which it operates.

Since the Spring 2019 semester, Parking and Transportation Services at UA has combined the old three-route system around campus into the now one Weekday Circulator route.

Jared Coleman, Director of Parking and Transportation Services, said the changes were made over the summer based on data collected by his department each year.

According to Coleman, drivers collect specific ridership information throughout their shifts based on the time of day and the stop. This information is then recorded on a spreadsheet to be analyzed each month by the department.

“We have really detailed granular information on where students are getting on the bus,” Coleman said. “Every year over the summer we look at that and see where things are that need tweaked; a lot of times that is through looking at under-utilized stops.”

Through analyzing this data, Coleman and his department made the decision to combine the Polsky Express, East and South routes to eliminate backtracking and the need for transfers, while also saving money.

Earlier coverage of this topic showed that some students weren’t happy with the new route due to longer ride times than in previous semesters. This still appears to be the case for many students.

Reece McQuinn, a junior psychology and history major, frequently utilized the free shuttle last semester but hasn’t been on the new route since moving off campus.

“I haven’t been taking (the Roo Express) because I know they changed the route and it takes too long for me to take it anymore. So I’ve been having to drive to Polsky,” McQuinn said.

Freshmen Janai Duckworth and Imani Martin also feel that the Polsky building should be a prioritized stop, as it is separated from the main campus and a lot of students have classes there.

“I feel like they should have their own separate bus to Polsky,” Duckworth said.

Martin agreed and said she would prefer to have a shuttle “that just goes automatically from the Student Union to Polsky,” similar to the Polsky Express route from last semester.

Coleman said he’s heard this kind of feedback around campus and wants to make sure that students are aware of how the new system works so they can use it to their advantage.

“One of the biggest needs our transit system serves is a connection between main campus and the Polsky building,” Coleman said. “I try to educate students on the fastest and best ways to use routes for important connections.”

Coleman’s suggestion is to take the Downtown Akron Shuttle (DASH) from the College of Arts & Sciences building to Polsky and then take the Roo Express back.

“It’s just different and there’s a learning curve, so it takes a little time to get used to the new route,” Coleman said. “A loop system like we have now has to be utilized a little differently than the old route systems.”

Another option available to students is to download the free DoubleMap app, which allows students to track the Roo Express in real-time while receiving estimates on arrival times, up-to-date information on traffic and other factors that may affect arrival times.

“Campus and things around campus change each year so we want the service to be as convenient and useful to students as it can be,” Coleman said.

Students with questions or concerns regarding the Roo Express should contact the UA Parking and Transportation Services either by email at [email protected] or by phone at 330-972-7213.