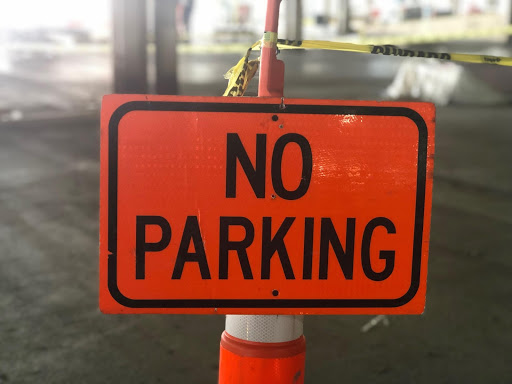 One of the several signs indicating a potential hazard area in the West Campus Parking Deck.

As construction on the West Campus Parking Deck continues into the sixth week of the semester, Capital Planning at The University of Akron may have a completion date set.

With 1,493 spaces in the deck, including 30 handicap accessible spaces and 12 metered spaces, the parking deck is located on 275 S. High St.

Most of the construction took place over the summer and is planned to continue into the fall semester for a brief period of time so as to not intrude on student activity.

Stephen Myers, head of Capital Planning and a licensed architect, said the $1.4 million project is coming along fine and should be finished in early November, as workers are on-site weekdays from 7 a.m. to 3 p.m.

Funding for the construction, according to Myers, comes from allocated money for campus repairs, as well as student parking fees.

As of right now, no safety incidents have been reported in any of the construction zones.

Students are encouraged to continue avoiding the portions of the parking deck that are blocked off as they are deemed the more dangerous zones during construction.

“We block off the parts that are dangerous,” Myers said. “We don’t want anything falling on people’s heads or cars.”

Originally constructed in 1961 for Polsky’s Department store, the parking deck was obtained by UA from the National Industrial Development Corp., according to an article from the Akron Beacon Journal.