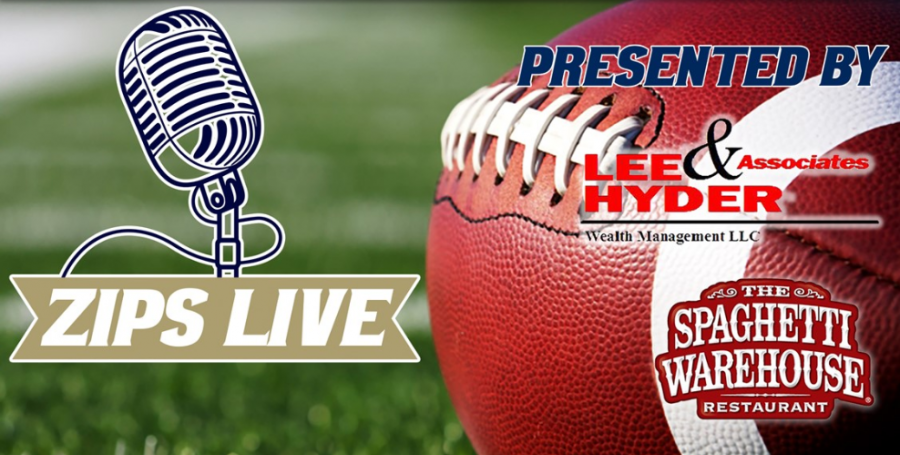 (Graphic via The University of Akron)

Zips LIVE is a radio show that covers Zip Athletics on Tuesdays from 7 to 8 p.m. live from the Spaghetti Warehouse.v

Airing locally on the Akron Sports Network flagship Fox Sports 1350, WARF-A and the Fox Sports 1350 channel on iHeartRadio, the show runs from 7 to 8 p.m. every Tuesday live from Spaghetti Warehouse at 510 S. Main St.

Host David Skoczen and Coach Arth discussed how the football season has gone so far for Akron and specifically about the game against Troy, marking their fourth loss out of five losses so far this season.

Coach Arth said these losses have helped the team learn about how they need to compete moving forward.

“You really get a great feel of what you truly have,” Coach Arth said. “That’s been the benefit through all this and it’s making us strong and making us tougher and we’ll be better for it.”

Zips football will compete at home for its homecoming match against the Kent State University on Oct. 12 at 3:30 p.m.

In addition to talking about UA football, Skoczen also talked to Trainer, the men’s golf coach, about their progress in the season and how the weather’s been impacting the team members.

Due to the approach of Hurricane Florence, the first Invitational UA participated in at the Ocean Course was shortened to 36 holes and Akron ended up placing seventh overall.

Then, according to the Zips Athletic Website, heavy rain caused the cancellation of the next invitational, the Bearcat Invitational.

Trainer spoke during the show about the Firestone Invitational that UA hosted on Sept. 30 and Oct. 1.

A total of 15 teams and additional local teams, such as Youngstown State, participated in the Firestone Invitational at the Firestone Country Club.

“It’s gonna show us real quick where we are [and] who we are as a team,” Trainer said.