The opening reception for “PORTALS” was held during Barberton’s annual Mum Festival. 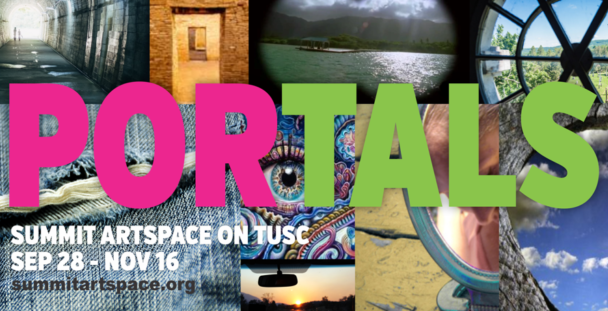 Similar to how a portal is a way in, out or between things, the photographs comprising the exhibit are considered portals themselves as they “frame, isolate, reveal or add a new dimension to the image,” the gallery’s website said.

Running through Nov. 16, the exhibit will continue to be free and open to the public each week on Fridays from 5 to 8 p.m. and Saturdays from noon to 5 p.m.

Kamelia Fisher, executive director of Summit Artspace, said they are excited to open the exhibit in Barberton after the enjoyment and support for other exhibits in the Tuscarawas gallery and artists studios.

To celebrate the opening of PORTALS, Summit Artspace held a free reception at the exhibit with the artists and jurors this past Saturday from noon to 5 p.m.

Photographer Don Parsisson of West Akron served as the juror for the gallery. Parsisson has a gallery and studio in Summit Artspace on East Market Street that is open to the public.

Joshua Fitzgerald, a photographer who submitted work to be shown in PORTALS, was awarded first place for his piece “99:1” and received an honorable mention for his piece “Scary Larry.”

As nothing man-made is visible in any of her photographs, Ray entered three different photographs show the essence of nature.

Ray spoke of walking along the berm of a road when she captured “INTO THE MIST.” She was overwhelmed by the purity of nature and in her words, the image she was able to capture “just framed itself.”

Anyone who has the privilege of seeing Ray’s work can easily understand why she won an honorable mention for her submission of “NATURE’S SCULPTURES.”

Next, as an alumni from The University of Akron, Saus Balogh received her BFA in metalsmithing and is a former master jeweler wanting to pursue art.

Since transitioning from sculptures to photography, Saus Balogh has chosen to focus on nature. She captured “Walking through Zion” while at one of the entrances to Zion National Park.

Lastly, nine-year old Jonathan Ketchens, an aspiring artist, expressed excitement at the end of the exhibition, stating he could visit the artspace several times and it still wouldn’t be enough.

“Each picture inspires me to want to make my own portal using art,” Ketchens said.