With nine consecutive wins so far this season, the team is preparing for matches this weekend against Ohio University and Kent State University. 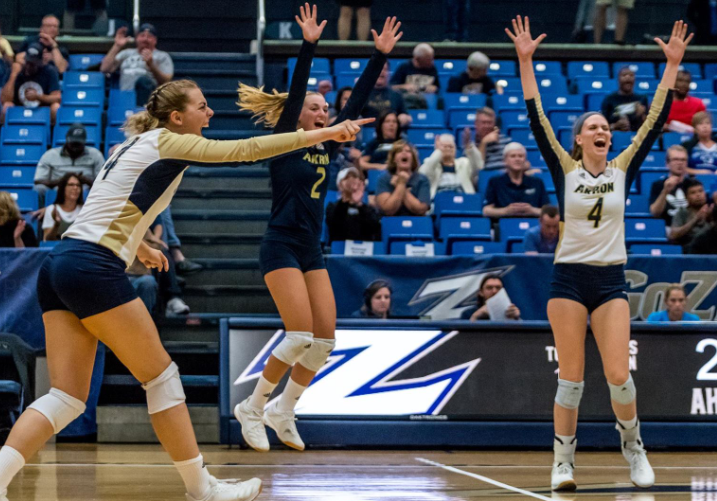 Heading into Homecoming weekend at The University of Akron, the women’s volleyball team has won nine consecutive games this season with an overall record of 11 wins and four losses.

According to the athletic’s website, this nine-game winning streak started on Sept. 13 with their  win over St. Francis (PA). The Zips won all three sets, bringing their record to 3 wins and four losses.

The next four games resulted in similar scores of 3 to 0 against Eastern Kentucky, Seton Hall, Eastern Washington and North Dakota.

However, the volleyball team almost fell short in their match against Buffalo on Sept. 26. Nonetheless, the Zips pulled through in the last set with a score of 15 to 10, beating Buffalo 3 to 2.

This scare continued again on Sept. 28 against Ball State. However, the UA women’s volleyball team came out scored 18 to 16 in the last set, pushing their 3 to 2 win over Ball State.

In their matches this past weekend, the team continued their winning streak on Oct. 4, beating Bowling Green 3 to 1 and on Oct. 5 against Miami (OH) with 3 to 0.

Tom Hanna, head coach for the UA women’s volleyball team, said the Zips have had a good season so far with hard working players who are continuously improving and developing their skills.

“We’ve been really good in practice over the last two weeks or so,” Hanna said. “If we continue to be good in serve and pass, our level of play should be high enough to allow us to be competitive in matches.”