Original Song by UA Student to be Performed in Local Church

Junior Witt Cooper says his piece “Kyrie” will show the community that classical music is still alive and young. 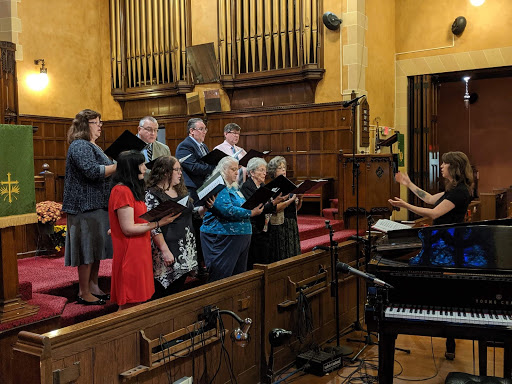 Judy Schwager (right) looked to collaborate with The University of Akron as one of her first tasks as Trinity United Church of Christ’s director of music.

An original song titled “Kyrie” by a student from The University of Akron will be performed by a choir accompanied by an organ and small chamber orchestra at Trinity United Church of Christ on Nov. 10 during the 10:30 a.m. worship service.

Originally from Cuyahoga Falls, junior Witt Cooper, a music composition major, began his career in music at 13 years old when his father gave him an old electric guitar.

After attempting to self-learn the electric guitar, Cooper received an acoustic guitar from his father and found it to be more interesting to play and learn.

Before attending UA, Cooper’s only musical training was his self-taught lessons on guitar, violin, piano and vocals. During his time at the University, Cooper said Dr. Marie Bucoy-Calavan has shaped his ideas of what music can be.

“I think everyone realizes how impactful music can be, but especially at university, it becomes more academic,” Cooper said. “Bucoy-Calavan has grounded me in that.”

Cooper cited an array of sources of inspiration for his compositions, including classical composers Mozart and Bach, the pop folk sound of his father’s music, Coldplay and even assignments he has been given in class.

Then, in creating the title for his original song, Cooper used the Greek acclamation Kyrie eleison. According to dictionary.com, this phrase means “Lord, have mercy.”

Through the performance of his original piece at Trinity United Church of Christ, Cooper hopes the community will better understand how music is something everyone is able to experience.

One person who aims at helping the community reach this understanding is Judy Schwager, the new director of music for the church and a long-time family friend of Cooper.

Working with Schwager and the church has helped Cooper see how taking a song from notes on a page to an actual performance is much more than it seems.

“Me having written the piece is a small piece of the project,” Cooper said. “There’s how you imagined it would sound in your head, then you hear a group of singers perform it and it’s totally different.”

This difference in expectation versus reality leads to the need for compromise in rehearsing a song for performance, especially Cooper’s original song as it requires eight different solo instruments.

From this Cooper has been editing the piece for about eight months and encourages aspiring musicians not to limit themselves to one specific thing.

“Learn everything you possibly can,” Cooper said.

Trinity United Church of Christ is located at 915 North Main St. Parking is located behind the church.

“Music is an art form that is tremendously close to the human spirit and it’s important to treat it that way,” Cooper explained.