UA’s new president answered questions from students and shared his hopes for the future in a press conference on Oct. 11. 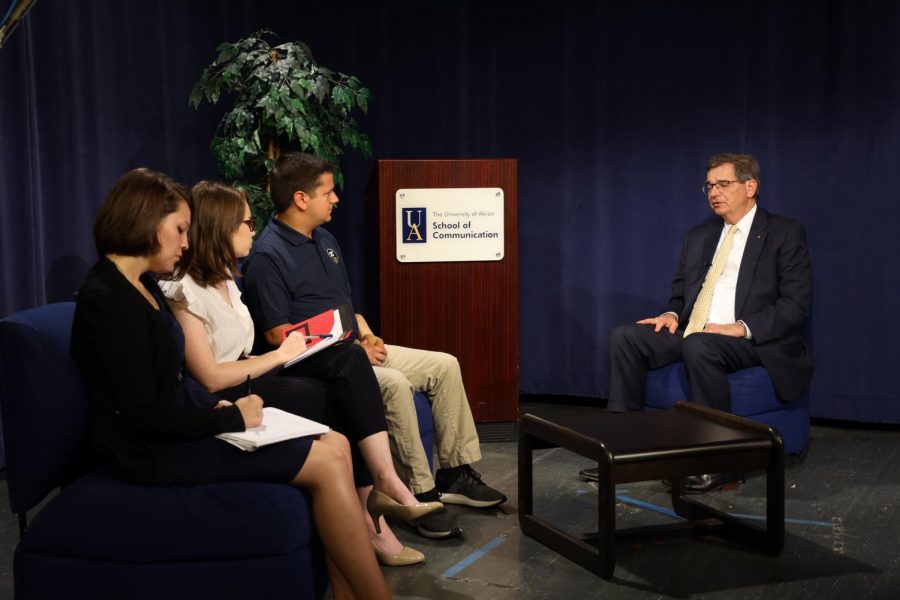 On Oct. 11, The University of Akron’s new president, Gary L. Miller, sat down with representatives of the student media groups on campus for a press conference to answer questions from students and discuss his plans for the future of the university.

President Miller was invited by ZTV, WZIP and The Buchtelite for a special interview where he discussed plans for his new presidency directly with students.

Elected on Aug. 14 after a unanimous vote by the UA Board of Trustees, President Miller assumed his duties as on Oct. 1.

During the press conference, President Miller discussed one of the big topics on campus, which is the challenges the University is facing. These challenges include declining undergraduate enrollment and creating a strategic plan for the future.

“The last institution I had was in an enrollment decline when I got there and we had to turn it around,” President Miller said. “This is something that there’s a lot of national discussion about and there are a lot of models, so we are looking at all of those.”

President Miller emphasized a “whole institution approach to enrollment” and the implementation of a new “enrollment task force” to assist in making decisions to change the trajectory of undergraduate enrollment.

Another topic of discussion on campus is the question of the continuation of Five-Star Friday’s.

“We were having trouble getting scheduling done and we really need to make sure we take care of that part of our organization first,” President Miller said.

Next, when asked what his number one goal is right now as president, President Miller said he has a few decisions to make in implementing a strategic plan for the University by June.

“My view is this institution has everything it needs to succeed, we just need a really hard-hitting plan and we need to execute on it,” President Miller said.

In addition to these topics, which are concerned with UA as a whole, President Miller also spoke about his and his wife Georgia’s focus on students and how important their input will be in his decisions as president.

“Georgia and I have always enjoyed our informal interactions with students,” President Miller said. “You folks are smart and optimistic and we are here to be with you and get that journey started.”

Lastly, in relation to his past experience as a member of teaching faculty, President Miller hopes to put greater focus on the faculty here at UA.

President Miller said he’s had several conversations with members of the faculty and is receiving feedback from them about the direction the University is heading as it is something they are uncertain of.

Overall, President Miller is optimistic about UA’s future and raves about his admiration for the institution that he now proudly represents.

“I think [students] should be confident that the programs being delivered to [them] and the faculty delivering them are some of the best in the world,” President Miller said.