Students are welcome every Sunday to play against other fellow Zips. 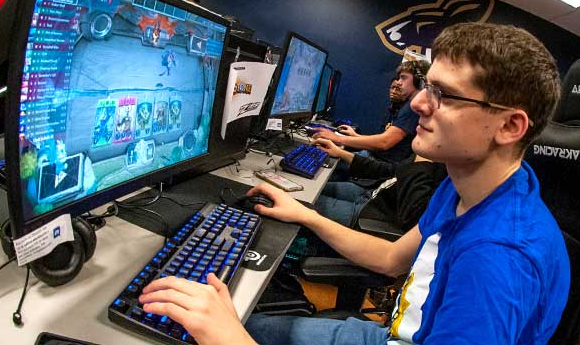 Students from The University of Akron playing on one of Esports’ several locations on campus.

By Jack Tupta and Kaitee Horstmann

The University of Akron Esports program offers a variety of clubs based on popular games for students who want to participate in the competitive video gaming with fellow Zips.

One of these clubs, based on Super Smash Brothers, hosts weekly tournaments to bring together students to play the video game “Super Smash Bros. Ultimate” every Sunday at 1:30 p.m. in the Jean Hower Taber Student Union Zips Esports Center.

The game, created in 2018 for the Nintendo Switch, is the fifth installment of the series and is available in both single player and multiplayer modes with all characters from the previous versions available.

Freshman Eli Robertson went to one of the tournament events on Sept. 24 and said overall, gaming with other UA students was an exciting experience.

“I was able to bond with people around my age who are interested in the same game I am,” Robertson said.

During this event, there were multiple consoles the student union esports center. Students were able to choose a setup and assemble a group of people to play in multiplayer mode of “Smash Bros. Ultimate.”

Sophomore Kadan Johnson said although he had seen several of the students at the event around campus, he would have never guessed they shared an interest in the video game.

“If it wasn’t for this event, I wouldn’t have made friends with all of these people,” Johnson said.

The Zips Esports varsity Gold Team’s next match will be on Oct. 28, from 5 to 6:30 p.m. against Kent State University.