As a graduate from The University of Akron, this actress, game show host and voice over artist gained her first media exposure through WZIP. 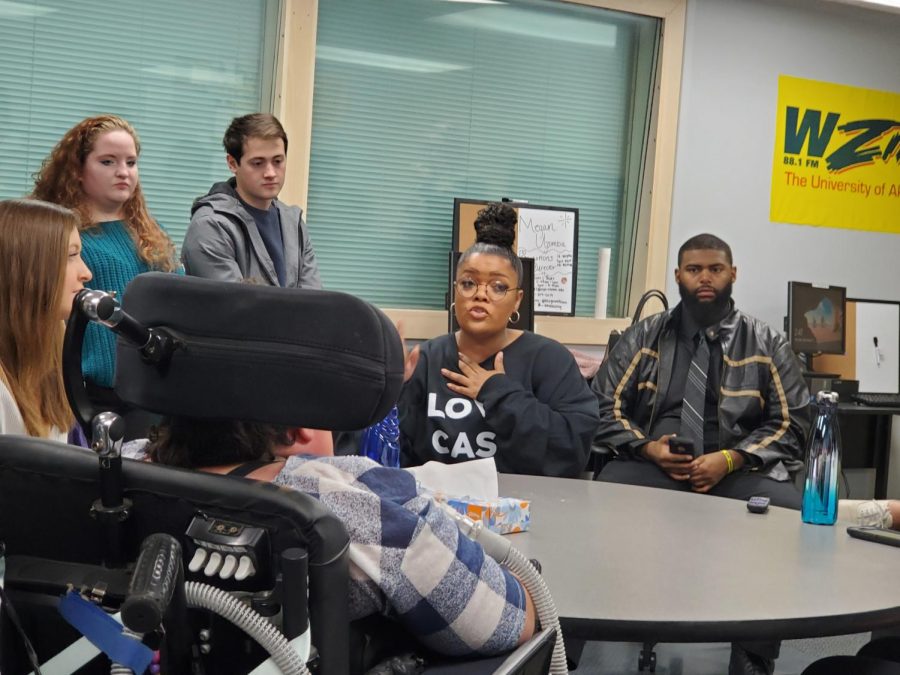 Yvette Nicole Brown told students to build a foundation under themselves in order to stay stable when they make it big.

By Megan Parker and Kaitee Horstmann

Cleveland native Yvette Nicole Brown is well-known for her role as Helen in the hit series “Drake & Josh” and her role as Shirley Bennett on NBC’s comedy series “Community.”

One thing people may not know about Brown is that she graduated from The University of Akron in 1994 with a degree in communication and was involved with the number one college radio station in the country: WZIP.

Before receiving the Alumni Honor Award on Nov. 9, Brown stopped by WZIP in Kolbe Hall to not only visit where she got her first media exposure, but also to talk with students involved with the media organizations.

“This makes me feel at home,” Brown said while sitting with students in WZIP after a live radio interview with Justin Miller.

During her visit, Brown shared multiple items of advice and inspiration with the students about getting through college and what life is like once graduation is complete.

When first asked about the biggest thing she took away from her time at UA, Brown said time management, as it becomes a huge focus in the future.

“What you’re learning is wax on, wax off. It’s stuff you don’t think you need but you need it,” Brown said. “But it’s not the same as adulting and real time out in the world.”

In addition to time management, Brown encouraged students to enjoy their time at UA because of how fast time moves and the chance they might not see college friends after graduation.

The best way to accomplish this is by journaling daily experiences, Brown suggests, even if an entry consists of two sentences or a page about what happened.

Next, students asked about how to deal with “creative burnout” in the media industry. In response, the overall idea Brown expressed is that you have to love your career and what you are accomplishing within your career.

“There’s a lot of stuff about this industry that is not gonna be to your liking,” Brown said. “The only thing that gets you up every day, put on a suit and come is if you love it.”

In fighting the creative burnout, Brown also recommends not staying with one career because of what it may appear to be. Also, do not look at failure as a negative experience, as it may be a sign to change directions.

In addition, Brown told students to never stop creating additional opportunities in life outside of a career. Having more than one area in life to use talents and skills allows for a change later on.

“Always try to find a new place for you to use your gifts,” Brown said. “You are gifted in more ways than you even know. You use whatever you have wherever you are.”

Out of everything Brown said to the students involved in WZIP, ZTV and The Buchtelite, one item she wanted them to remember most is how life is bigger than what people may think.

In this, people can have more in life in terms of non-financial aspects than what is imaginable no matter how hard times may get; including peace, contentment, friends and more love.

Brown added that she’s faced hard times of her own, especially at first after moving to Los Angeles. But that didn’t stop her from chasing her dreams.

“I was starving because I didn’t have money. I either had to pay for student loans and for a roof over my head or I could eat,” Brown said. “So there’s really dark times in any journey toward a dream. But again, if you love it, you move past it. You fight through it. You have to do it.”

Those in the room when Brown said all this and more, no matter what student media organization they are involved with, were touched in ways they could not always put into words.

Sophomore Abigail Stopka, a public relations major and underwriting director for WZIP, said she originally went to meet Brown because of how cool it would be to see a UA graduate who made it far in the media industry.

However, once Stopka started hearing Brown’s advice, she was glad she went for an entire different reason.

“The most memorable thing Yvette said was actually pretty much everything she said. She was so inspirational and pretty much explained how you should follow your heart and soul and not let anything stop you from being the best you that you can be,” Stopka said.

Students are not the only ones who were impacted by Brown’s words of inspiration during her visit.

Chris Keppler, general manager of WZIP and professor in the School of Communication, said watching his students interact with Brown on a personal level almost brought tears to his eyes.

“I just found what she had to say so real, so motivational, so inspirational and I just thought I wish I had half of that to pass on to people,” Keppler said. “She basically said it’s okay for you to not just dream but act on it. Make it real.”