UA’s chapter of the national organization focuses on educating students about sexual health and reproductive justice. 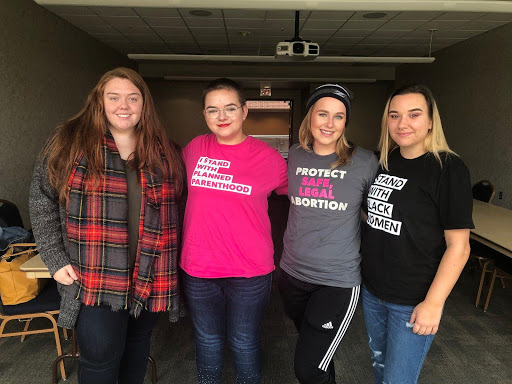 A small group of young women gathered in Student Union Room 310 on a Friday morning for a meeting and an educational presentation titled “Vaginas and Pleasure.”

The University of Akron chapter of Planned Parenthood: Generation Action, also known as PPGenUA, was founded during the Spring 2019 semester.

Madison McKinney, the organization’s current President and one of its founding members, said that interning with Planned Parenthood in the fall of 2018 led her and another student to start the on-campus group.

“We did not do much in our first semester. It was really hectic trying to organize what we wanted to do and how we wanted to reach students,” McKinney said.

As an extension of Planned Parenthood of Greater Ohio, it focuses on providing students with resources and information related to sex education, sexual health and reproductive rights.

According to the Planned Parenthood: Generation Action website, there are over 350 student organizations on different campuses across the country.

They also organized a feminine product donation drive for refugees at the southern US border during the summer, which resulted in about 50 boxes of products being donated.

The women of PPGenUA have also faced plenty of challenges. McKinney says that founding the organization was difficult, as university officials continually lost track of paperwork and important emails.

Their placement at RooFest, the university’s largest involvement fair, also left a lot to be desired.

“We were stuck in the very corner, surrounded by religious organizations, while all of the other more liberal organizations like LGBTUA were on the complete other side and in a group together,” McKinney said. “I definitely feel like we’ve been singled out.”

Title X funding used to provide PPGenUA the opportunity to offer free STD and STI testing at the Rec Center. But recent changes to the laws have forced Planned Parenthood out of Title X eligibility.

The group has also faced backlash from the various anti-abortion protestors that come to campus.

“I think it fuels all of us a lot more to have all of these political attacks happening, because we have something to fight for and speak our mind about,” Amy Quitter, vice president of PPGenUA, said.

Still, PPGenUA has a lot of support on campus. During anti-abortion protests, members of the group collected 30 supporter cards in just an hour.

McKinney said that being faced with such protests actually encourages some people to more explicitly show support for Planned Parenthood.

“People came up and hugged us; they thanked us,” she said. “I think it’s also helping us gain those hardcore supporters that are going to show up to events and show up to volunteering.”

Their biggest goal is to attend the annual Women’s March in Washington, D.C.

While all of the women at the meeting agreed that it is important to talk about abortion in order to dispel the stigma and misinformation surrounding it, they also wanted to emphasize that they are about more than just providing abortions and abortion referrals.

“We do so much more than just talk about abortions. We are here to support reproductive justice, and we need to support justice now more than ever,” Calli Onest, treasurer for PPGenUA, said.