UA’s largest LGBTQ club offers a support network for students and works to create a welcoming environment for everyone. 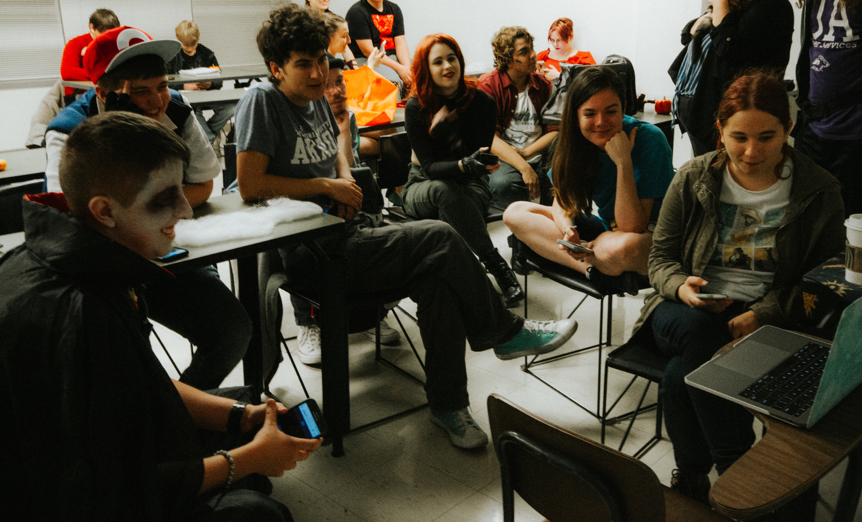 Members of LGBTUA watching videos on a computer.

On April 30, 2019, members of The University of Akron’s largest LGBTQ club gathered to paint the rock on campus in bright rainbow colors.

Painting the rock has been a campus tradition since the 1960’s, according to UA’s website. The rainbow colors of the rock celebrated inclusivity and equality for all students and symbolized a positive end to the spring semester for members of LGBTUA.

Sam Tropea, sophomore and vice president of LGBTUA, said that the vandals had “spray painted [the rock] black, covered it in Vaseline and littered around it.”

Fiona Szeles, sophomore and director of communications added that the vandals had also spray painted the words “hetero UA” and a false statistic that 40% of people believe same-sex marriage shouldn’t be legal in the United States.

According to the Pew Research Center, 61% of Americans support same-sex marriage.

Members of LGBTUA were disappointed by the vandalism and what it represents – continued intolerance on campus.

LGBTUA is an organization of LGBT students, faculty, allies and alumni. Although it is the largest LGBTQ club on campus, The Gay-Straight Law Alliance and Pride in STEMM also provide a safe and welcoming environment.

According to the organization’s constitution, LGBTUA was first established in 1985 to validate the uniqueness of everyone’s sexual orientation, gender identity and expression. Today, they continue to do so, in the face of continuing challenges.

In addition to the vandalism of the rock, religious demonstrations on campus targeting LGBTQ students present further challenges for the group.

“It’s really discouraging to walk outside and have a bunch of preachers like ‘Hey, you’re going to hell because of who you are,’” Szeles said.

According to RooConnect, LGBTUA’s goal is to provide LGBT students an environment where they can freely gather for support, networking and advocacy while striving to create education programs and events toward eliminating misconceptions and myths.

Szeles said that future outreach efforts include plans to partner with Planned Parenthood and Pride in STEMM to offer more support to students.

LGBTUA is also working to set up a care closet where trans students can swap clothing and students in need can access personal care items like toothbrushes, toothpaste, shampoo, and tampons. Students can access these resources by emailing the officers listed on LGBTUA’s RooConnect page.

LGBTUA meets every Tuesday from 7 to 8:30 p.m. in the Jean Hower Taber Student Union room 316.

Students can join LGBTUA by emailing any of the officers listed on the RooConnect page. There is no fee to join and LGBTUA is open to all students.