Printmaker Tom Hück has also been chosen as the Spring 2020 Myers residency artist. 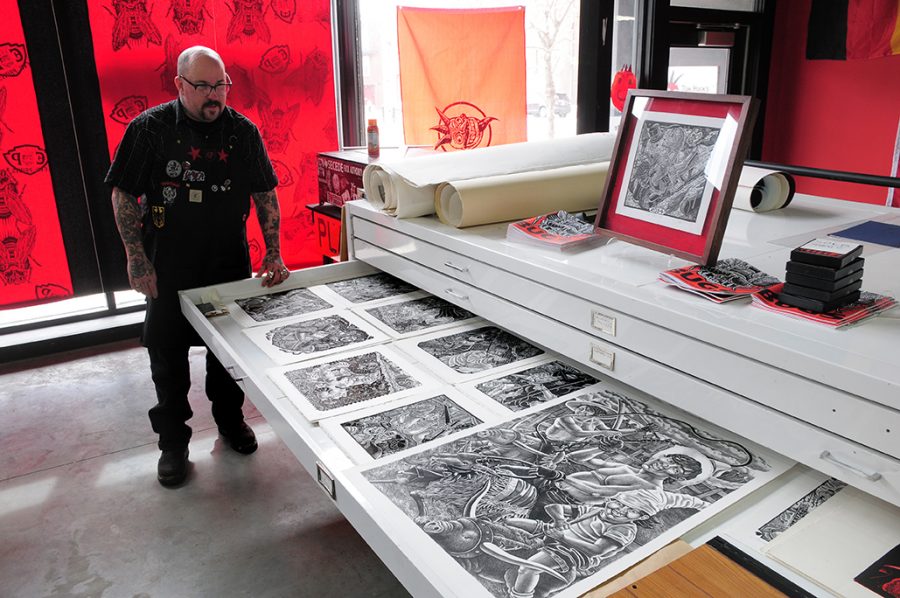 American printmaker Tom Hück with a selection of his works.

Running through Feb. 14, this exhibition was organized by the Emily Davis Gallery and Hui-Chu Ying, professor and printmaking coordinator at UA, according to a UA press release.

Works in this exhibit were created by American printmaker Tom Hück and 18th-century English printmaker William Hogarth, one of Hück’s major influences.

Like Hogarth, Hück is well known for his remarkable satirical prints that offer social and political commentary.

“These renderings of rural life, loaded with an abundance of detail, are rife with dark humor and symbolism that communicate his view of ‘the underbelly, the disgusting nature of America, the world in general’,” the press release said.

When asked about his artistic style, Hück said, “If you take the band Motörhead, you throw in a lot of Albrecht Dürer, a little bit of Frank Zappa and some R. Crumb, that’s me.”

All of the works created by Hück are highly detailed and unapologetically outrageous in content. Some works such as Electric Baloneyland, which is included in the exhibition, measure up to several feet in length.

Along with his work being shown in the exhibit, Hück will produce a new piece with students from the Myers School of Art over the course of a week in February.

In addition, a free Artist Talk is scheduled Feb. 6 at 6 p.m. where Hück will speak about his work and the process it takes to create the highly detailed pieces.

All exhibitions and events at the Emily Davis Gallery are free and open to the public. Regular gallery hours are from Monday to Friday 10:00 a.m. to 5:00 p.m.

The works from Hogarth were selected from the Dr. James Chisman William Hogarth collection, owned by the Myers School of Art. The exhibit’s presentation is sponsored by the Gallery Committee and the Myers Residency Fund.