Sammy Obeid, a California native, has appeared on television shows such as “Conan” and “America’s Got Talent.” 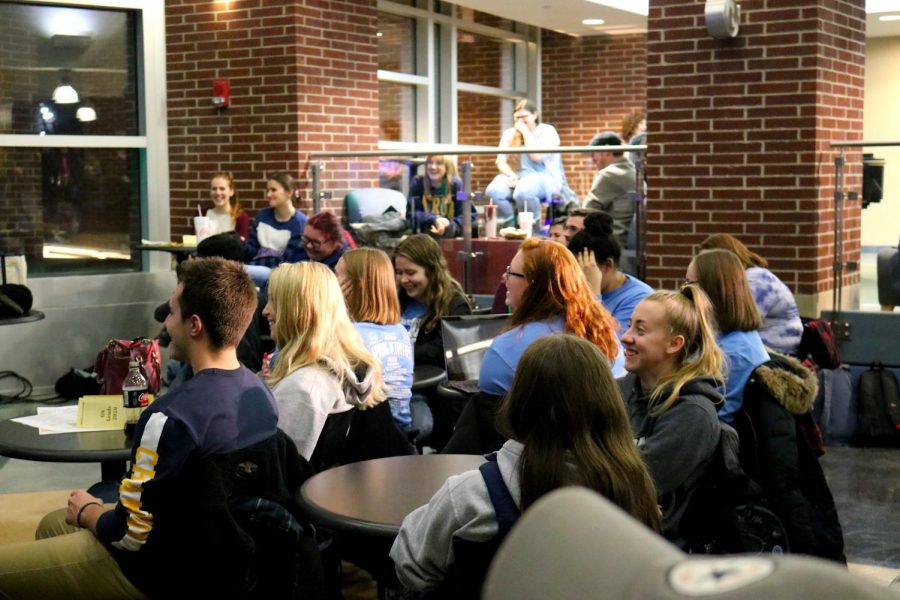 Several students enjoyed taking a break from homework and responsibilities during the event.

Continuing their 7:17 and 9:09 series, the Residence Hall Program Board and Residence Hall Council had comedian Sammy Obeid perform on Jan. 29 in the Jean Hower Taber Student Union.

In addition to this streak, Obeid has appeared on television shows such as “Conan,” “America’s Got Talent” and “Throwdown with Bobby Flay.” Obeid also plans on running for President in 2036.

When Obeid stepped on stage in the student union, audience members knew he researched his audience after his first joke relating to running over a deer on his way to Akron, but the deer was already dead when he ran over it.

Junior Elizabeth Piolli, an early childhood inclusive preparation major, said this was her favorite joke of the night as “the deer thing was very funny because it’s Ohio.”

Obeid also related many of his jokes to the college students and made his show very interactive. One time, Obeid asked everyone to google “Happy Fish” as students in the audience quickly pulled out their phones.

Luke Trese, a sports management major, said he enjoyed the show because Obeid had a wide range of humor and made sure everyone could laugh at least once during the show.

In addition to his Ohio-based jokes, Obeid attempted to normalize things considered as sensitive topics by turning them into humor; such as the number of vegans and vegetarians in the world today.

Several students said they would be interested in attending another show by Obeid and future RHPB events, such as freshman Casey Bachowski, a business data analytics major.

“I think that RHPB puts on great events,” Bachowski said. “They’re always hits and I recommend other students should come.”

Junior Sienna McArthur; a strategic and organizational communication major, as well as the current president of RHPB, said all the events held are geared toward giving students a fun activity on campus outside of their rooms.