Many members of the team are looking forward to next season and working hard for an eighth win next year. 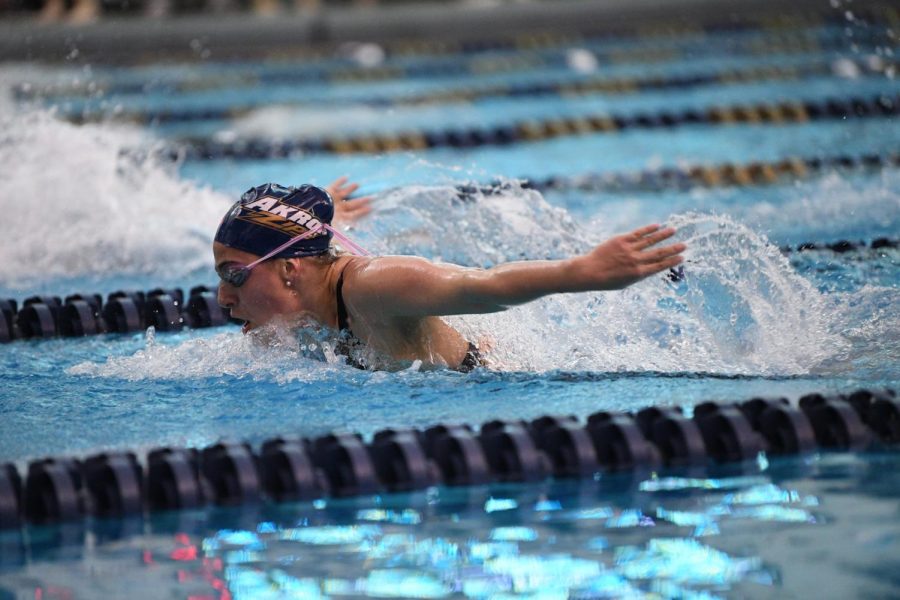 Many members of the Women’s Swimming and Diving team broke pool records during the 2020 Mid-American Conference championship.

The University of Akron Women’s Swimming and Diving team, ranked No. 25 in the nation, won its seventh consecutive Mid-American Conference (MAC) championship title on Feb. 29.

This year, the Zips traveled to Buffalo, New York, for the MAC championship after hosting the four-day competition last year.

Throughout the four days of competition, the Zips claimed a total of 811 points, with Buffalo in second with 738.5 points and Eastern Michigan in third with 485 points, according to gozips.com.

Head coach Brian Peresie said it was an amazing feeling to watch all the hard work the team put in pay off after facing obstacles during the competition.

“We had to deal with some adversity during the competition and I was proud of how they stood up and they kept fighting from the start of the meet all the way until the finish,” Peresie said.

During the 1650 freestyle, junior Brooke Lamoureux (Victoria, Canada), turned in a fourth-place time of 16:39.82 and was the highest placing zip.

Then, sophomore Sarah Watson (Winnipeg, Manitoba), followed with a strong performance during the 100 freestyle with an NCAA B-Cut time of 48.91. Followed by senior Morgan Waggoner (Fremont, Ohio) with a B-Cut time of 49.50.

The Zips were also successful in the 200 breaststroke, as junior Paula Garcia (Madrid, Spain) broke the pool record with a time of 2:10.68. Garcia was followed by sophomore Andrea Fischer (Oak Grove, Minnesota) with a time of 2:12.04.

“I think the environment was totally different from last year cause last year we got the MAC here at home,” Garcia said. “But it was pretty fun and exciting. We just had a good time and we worked for it.”

UA’s team was able to keep up the momentum in the 200 fly by taking each of the top three spots.

During the final event of the 2020 MAC competition, the 400 freestyle relay, the Zips secured first place with a time of 3:17.42 from Watson, Waggoner, Sofia Henell (Linkping, Sweden) and Nogaj.

Watson was also named the Most Outstanding Swimmer during the MAC championship, according to gozips.com.

“It’s a really great feeling and it’s a really big honor to be a part of such a great group of girls,” Watson said. “Day in and day out we come into the pool and work really hard. To have our results pay off and I mean, seven in a row is really incredible.”

In looking toward the future, all the members of the team were hopeful for an eighth MAC title next year, as well as continued bonding as a team.

Lamoureux, Fischer, Garcia and Watson believe the future is looking bright for the Zips swimming and diving team as they are going to keep working hard for next season.

“I think the team every year gets better and better,” Garcia said. “I think we can just keep it rolling.”