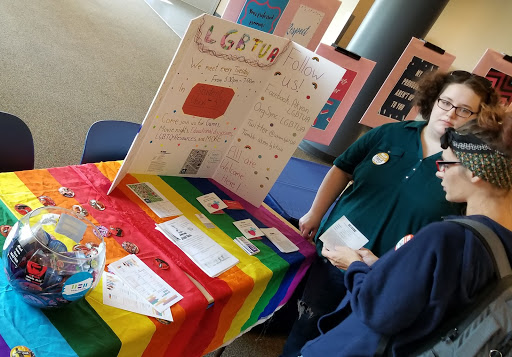 LGBTUA now meets virtually on Tuesdays due to the pandemic.

LGBTUA is a student organization at The University of Akron, which purpose is to provide an open and affirming group for LGBTQ+ students and their allies.

The organization was first founded in 2011 by a group of LGBTQ+ students who sought representation on campus. Beginning with a mere six members, the group has grown to over 30+ students in regular attendance.

Members of the group represent a wide variety of gender identities and sexualities, and the group has seen a significant influx is their transgender community.

Gabriel Gonzales, third-year student and proud transgender man, had difficulties changing his name on his Zip Card and school email account. Although this is an option for class rosters, Gonzales expressed that there was more to be done.

“When I asked the staff at the zip card office why I couldn’t change my name, they didn’t have an answer for me other than it being campus policy,” Gonzales rsaid.

Gonzales stated that he knew that LGBTUA would be able to help him get in contact with people with whom he could speak with on this issue.

Alexandria Wike and Blake Keuchel, senior board members of LGBTUA, decided that they would represent Gonzalez in a scheduled meeting with Michael Strong, the dean of students at the University of Akron.

“It was important that we got this issue handled, not just for students in our organization, but for any current and future transgender students at Akron,” Wike, President LGBTUA, said.

During their meeting, Wike and Keuchel explained the importance of preferred names on documents for transgender individuals.

This isn’t the first time LGBTUA was able to make change in their community. In March of 2019, the LGBTUA teamed up with Kent State University’s LGBT group to host a fundraiser in support of local LGBTQ+ organizations.

The fundraiser, titled Battle of the Wagon Heel, was a drag competition featuring performers from both universities. The competition resulted in a win for UA, with local Akron drag queen Alejandra J-Love taking the crown.

Together, the two organizations managed to raise over $2,000, which were donated to CANAPI and Camp Lilac, two local Akron LGBTQ+ organizations.

“Getting to make a difference in your community is special, and I know that we and Kent are grateful for the opportunity,” Keuchel, alumni outreach chair for LGBTUA, said.

UA is becoming more inclusive in embracing it’s LGBTQ+ students, as at the beginning of the 2019-2020 semester, the university released on their website a map of where the gender neutral bathrooms are on campus.

The university has also held on-campus educational events through the office of student life, including the events “My Pronouns Are:” and “How To Be A Good Ally”.

Students who are interested in joining the organization can find their main page through RooConnect, at https://uakron.campuslabs.com/engage/organization/lgbtua.