The award-winning team is preparing for next year’s big competition at NASA, despite the cancellation of this year’s event. 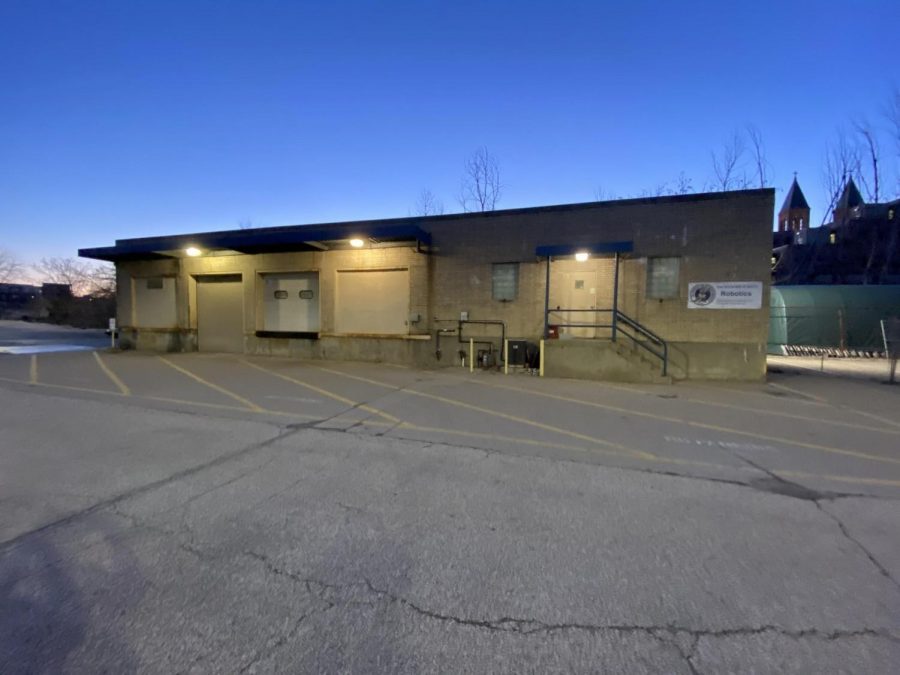 The Express Building where the Robotics Team typically meets throughout the semester.

The University of Akron’s Robotics Team was getting ready for the NASA Robotics Mining Competition at Kennedy Space Center scheduled for later in May, when their plans were brought to a halt by the global COVID-19 pandemic.

On March 10, The University of Akron President Gary L. Miller announced that all in-person classes, as well as student organization meetings, would be canceled through the end of the Spring 2020 semester due to COVID-19.

Since then, the Robotics Team has been working virtually, getting ready for next year’s competition.

“The biggest effect is that we cannot continue building the robot,” Gina Lanese, Vice President of the Robotics team, said. “The fall semester typically focuses on design, while at this point in the spring semester we are usually heavily focused on building and testing.”

Their objective is to create the best robot for mining ice chunks on the moon, as well as fostering an interest in the STEM field through numerous outreach events with K-12 students throughout the semester.

They have around 30 members and won second place in last year’s Robotics Mining Competition out of 50 teams. Earlier this year, they also represented the state of Ohio at the NASA Space Grant Consortium Anniversary event.
“The team’s mission is to take the knowledge learned in the classroom and be able to apply it,” team member Jason Colonna said. “It is a great place to learn practical skills they don’t teach in the classroom.”

While the competition at NASA has been cancelled due to COVID-19, the team continues to gear up for next year’s competition.They’re learning about more ways to work both mechanically and with code, as well as carrying out official business such as officer elections and other preparations for next year.

“It’s disappointing that we can’t have meetings and work on our robot, but I understand that it’s necessary,” team member Sarah Kuchcinski said.

The team hopes to win next year, and to “Beat Bama!”, as their competition is last year’s NASA’s competition winner, The University of Alabama. Alabama won Slide Presentation and Demonstrations, Systems Engineering Paper Award and The Joe Kosmo Award for Excellence.

UA’s team won second place in Slide Presentations & Demonstrations, as well as first place in Outreach Report. The Robotics Team’s outreach program is something they take much pride in, hosting STEM and robotics events for various K-12 schools around the Akron area.

“Every month we always try to give back to the community by providing them with the confidence they need to pursue engineering,” Kuchcinski said.

This isn’t the first time that the team has had to work around a cancellation, however.

“Last year, NASA had to cancel the competition due to the lengthy government shutdown that occurred,” Lanese said. “The shutdown put a pause on the construction of a building where the competition would have been held, as well as a pause on NASA employees’ projects. NASA cancelled the in-person competition, but still held a virtual one.”

When asked why the competition wasn’t held virtually this year as well, Lanese said that she thinks that teams would still need to meet face to face, putting them at risk of COVID-19, so the event is closed this year, but is planning on hosting the event as scheduled next year.