The photography of four regional artists are being featured alongside activist and photographer Danny Lyon. 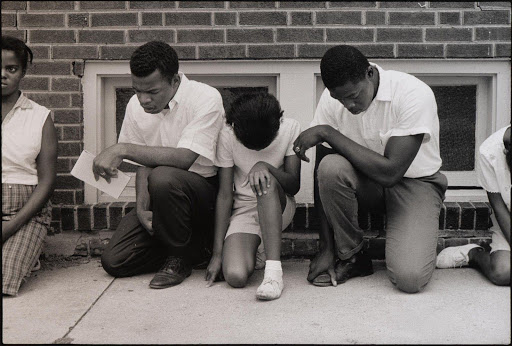 (Collection of the Myers School of Art, Gift of Frank and Amy Linde, 2019)

The newest exhibit in the Emily Davis Gallery, “Bearing Witness: A Response to Current Events by Regional Photographers” opened on Aug. 24 and is available to the public until Oct. 9.

According to a UA press release, selected works of activist and photographer Danny Lyon from UA’s private collection are also on display.

“I had been following the ‘Portraits of a Pandemic’ throughout the bulk of isolation and those images really gave me a sense of hope and community in my time of physical isolation,” said senior photography major Tim Bekelesky.

The origin of the series ‘Portraits of a Pandemic’ stemmed from Myers School of Art alumna Autumn Bland’s desire to remain engaged with the world during lockdown. The series offers visual comparisons of the lives of essential workers with life at home during the pandemic.

Another work by Bland, “Portraits of Pride,” is a tangential project “designed to connect, empower, and uplift LGBTQ+ people of all genders, sexual orientations, races, religions, abilities and ethnicities,” the press release said.

Next, Lyon is well known for photographing the Civil Rights Movement early on and employs the style of New Journalism in his photography.

New Journalism, developed in the 60’s and 70’s, is characterized as being more immersive than traditional journalism. In a sense, the photographer becomes involved with their subject matter.

Lyon’s work exhibits the origin of the fight for African Americans to gain equality in America.

This pairs well with Tavakoli’s work, which is an investigation of the “protest and civic unrest focused towards the police since the murder of George Floyd,” the press release said.

Tavakoli explores the Black Lives Matter Movement and how it has raised the issue of police funding versus funding for communities through education, social work and outreach.

According to Bekelesky, “while all the photographers in ‘Bearing Witness’ have different subject matter and photographic styles, the underlying meaning of finding a sense of community through loneliness is all the same.”