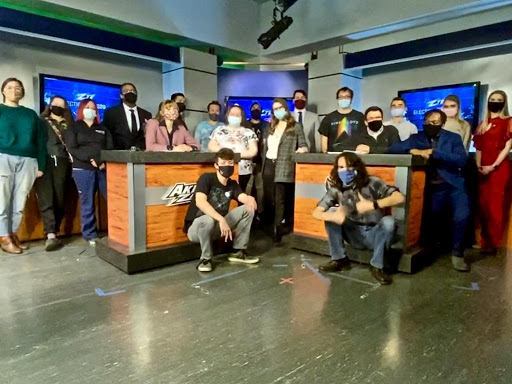 The ZTV Election Night Special team group photo in the studio at Kolbe Hall University of Akron after the end of production.

On Nov. 3, States officially closed their polls and started counting ballots for the 2020 election. ZTV was ready to cover this big event with their ZTV’s Election Night Special streamed live on The University of Akron’s YouTube.

ZTV has many different shows with different styles of production. All came together to contribute to a collaborative live production of the Election Night Special.

For some UA students, it was more than just an election. The students had spent many hours preparing, researching and getting ready to broadcast with live updates.

“Making sure that a group of 35 people are all on the same page at the same time is no easy task,” Burkhammer said. “However, I had an amazing team of dedicated people to work with.”

Professor of Practice Juan Eduardo Contreras, General Manager of ZTV, said his students did an excellent job in the fast-paced production setting.

“When I look at the end result, I see a production that was educational for our students and that met professional standards,” Contreras said.

However, the election event did not end with the announcement of the next president. The results were not announced until days later with Joe Biden and Kamala Harris named as President and Vice President.

Even though the big election event happens only every 4 years, ZTV offers many great opportunities for students at the The University of Akron.

ZTV will be open for new members in the spring. If you are interested in joining you can contact [email protected] or Professor Contreras.

“Our program is also open to all majors, so those in different areas of study can take advantage of being a member,” Contreras said. “After all, in the world we live in today, media and communication skills have become something employers highly value.”