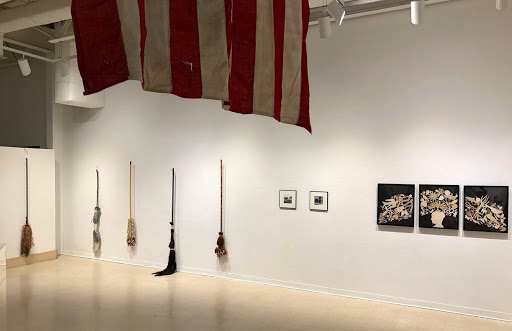 In collaboration with Corrie Slawson, Elizabeth Emery contributed several pieces to the Emily Davis Gallery’s Newest Exhibition ‘Suffrage: Inequality. Persistence. Justice.’ which opened on Oct.19 and is available to the public until mid-December.

Employing the use of screen-printing and letterpress, the regional artists collaborate to produce prints that pay tribute women such as Harriet Tubman and Kamala Harris, “strong women who have affected change and progress to women’s rights,” a press release said.

Emery stated that issues involving women’s rights have been important to her for some time.

She remembers when Title IX passed in 1972 and she said that when former World No. 1 professional tennis player Billie Jean King won against tennis champion Bobbie Riggs in the 1973 Battle of the Sexes match at the astrodome, she was watching.

According to Emery, the event itself was just as important as the month long lead up to it. She recommends watching the Battle of the Sexes movie featuring  Emma Stone and Steve Carell as King and Riggs, respectively.

Her involvement with ‘Suffrage: Inequality. Persistence. Justice.’ is the result of her many years of collaboration with fellow exhibit artist Corrie Slawson. Together they created “print-based work and sculptural performance all related to expanding space for women’s voices.”

According to Emery’s website, the multidisciplinary artist works across genres and various mediums.

Tunstall has been aware of that aspect of both Emery and Slawson’s artistic practice and invited them to take part in the exhibit.

While working on prints of both Lilly Ledbetter and the late associate justice of the Supreme Court of the United States, Ruth Bader Ginsberg, Emery stated she and Slawson learned a great deal about the women they chose to honor.

During her research, she wondered at how such “complex webs of racism, sexism, healthcare, and education” could ever be improved.

However, she hopes the visuals she created will excite viewers and lead them to learn things about women that they didn’t already know.

Emery expressed hope “that white women don’t make the same mistakes they have in the past when fighting for gender equality.”

She believes that gender equality is part of a much larger concept and that, “if Kamala Harris does become our Vice President, I hope our country learns a lot about how we treat women of color.”

Emery also expressed the importance for people to vote in the upcoming presidential election.

Another project Emery has been working on for the past several months seeks to amplify the voices of women.

“It’s been meaningful for me to bring some moments of goodness from smart, active, inspirational women to an audience looking for a bit of motivation and a sense of hope,” Emery said.

Ultimately, Emery sums up why events such as ‘Suffrage: Inequality. Persistence. Justice.’ and ‘Big Voices’ are needed and that they will continue be necessary, “until women have reached equity, platforms giving space, time, and voice to women will be important.”

All exhibitions and events are free and open to the public.

An online broadcast called, “UA Connections Series: Female Artists Respond to the Women’s Movement” will be held on Nov. 12 at 6 p.m.