“As a black female artist I feel like an investigator. I’m trying to make sense of the world in my work.” - Shani Richards 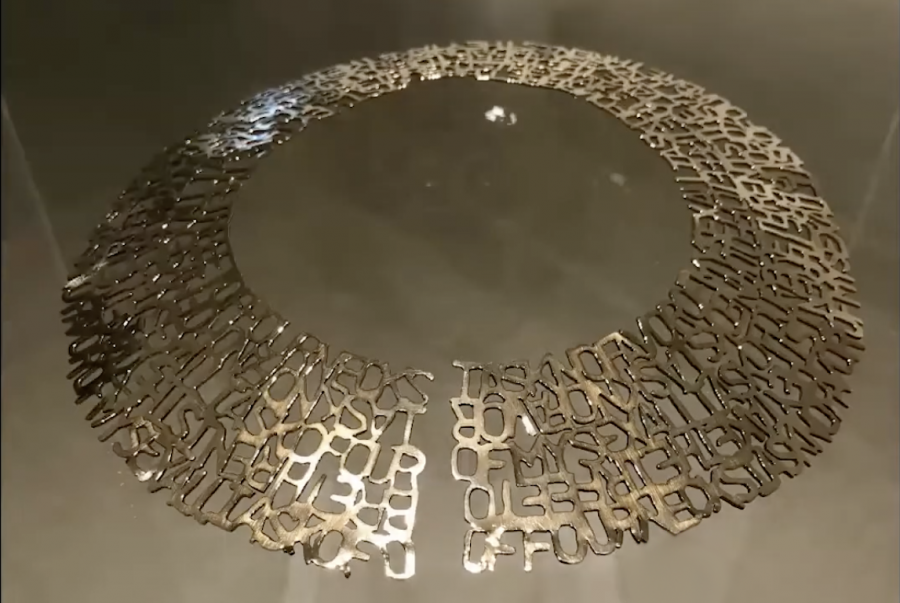 “The power of [Ginsburg’s] words are how they resonated through time to inspire and drive women to keep fighting for their rights.” - Shani Richards ‘100th Collar’.

The exhibit opened on Oct. 20 and will be available to the public until mid-December.

“I create art that addresses issues of racism, sexism and stereotypes,” said Richards.  “These issues are all reflection of this country and my work is all American.”

Richards created her Hanging Cabinet Series as a symbolic way to explore the role of hair for not only black women but also that of black men. Hair, or more specifically hair texture, used to be a way of showing status or race.

She was inspired by her observation of a mop being ignored in the corner of a room, similar to the way workers are sometimes ignored.

As well as contributing her Hanging Cabinet Series to the exhibition, shortly before the exhibit Richards decided another piece needed to be added to commemorate former Associate Justice of the Supreme Court of the United States Ruth Bader Ginsburg.

Richards employed her skills as a metalsmith to fashion a collar in the form of a quote Ginsburg is frequently associated with:

“I ask no favor for my sex, all ask of our brethren is that they take their feet off our necks”.

Richards stated in an interview that while the quote is often attributed to Ginsburg, it was actually first spoken by Sarah Grimke, an abolitionist and major figure in the suffragette movement, who Ginsburg was quoting.

Richards titled the piece ‘100th Collar’, in commemoration with the anniversary of the passage of the 19th Amendment.

The piece specifically speaks to Ginsburg because she was well known for her collar (jabots) collection. Ginsburg frequently used her collars as a way to visually communicate her stance on many decisions while in court.

Richards noted that there was even a collar she wore “when she had a dissenting opinion”.

Richards stated that she draws inspiration by what people wear to communicate their status.

“Ginsburg used the collar as a symbol of her power and womanhood. I wanted the collar to reflect the value of knowing history,” Richards said.

During the UA Connections Series – Suffrage: Inequality. Persistence. Justice. discussion held on October 22nd, Dr. Kara Kvaran noted that Richards’ piece was a “wonderful tribute” to Ginsburg, as her death was still fresh and brings a great sense of grief to those who admired her.

Richards stated that while working on the collar she was thinking of “the community in mourning.”

Arnold Tunstall, Director of the Emily Davis Gallery, described Richards’ tribute to Ginsburg as a labor of love. Richards worked on the collar day and night for two weeks straight to have it completed in time.

Richards used her saw frame to cut out of a sheet of brass with the quote continually repeating to make the shape of the collar.

When asked how she developed the concept for her piece, Richards said, “I have been fascinated lately with language and using it in my art to literally communicate a clear message.”

She also stated that “researching and connecting history with the present” are also ways in which she develops her concepts.