‘Nomadland’ Leads the Pack Into The Oscars

Frances McDormand once again steals the screen in a beautiful film about the journey of life and its challenges. 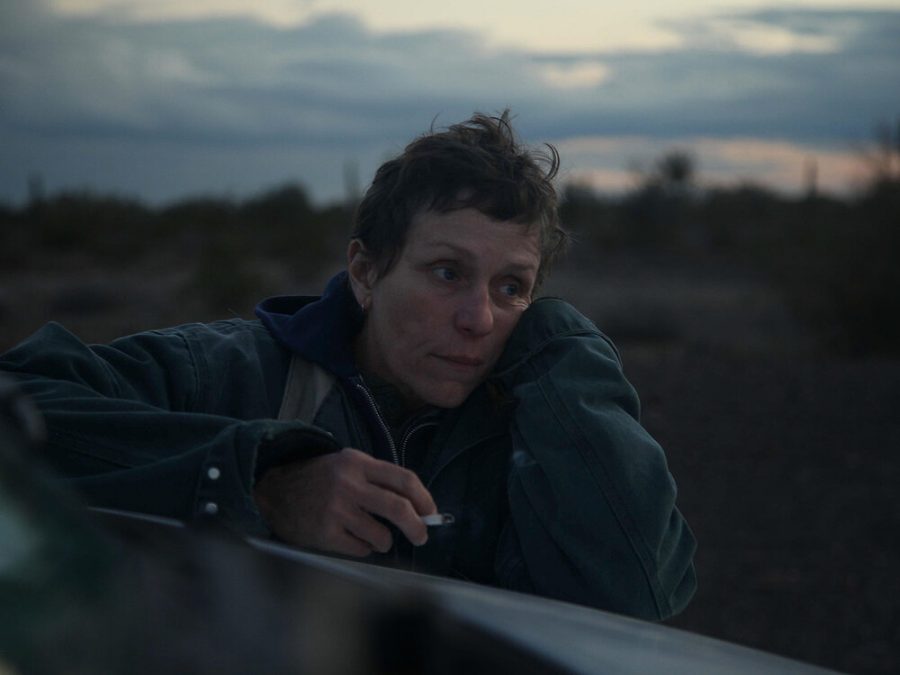 The Oscars have officially released their nominees and The Buchtelite is continuing to review films that are in the running. The next film in the series is “Nomadland,” directed by Chloé Zhao.

“Nomadland” tells the story of Fern, played by Frances McDormand (“Three Billboards Outside Ebbing, Missouri,”) who is recovering from both the recession of her mining town and the recent death of her husband. She decides to live her life in a nomadic style, in her car, roaming from place to place. She travels the country meeting new faces and learning the true meaning of home.

The first thing that needs to be said about “Nomadland” is the performance that Frances McDormand delivers. Just like her performances in “Fargo” (1990) and “Three Billboards Outside Ebbing, Missouri” (2018), “Nomadland” is another great opportunity for McDormand to win the best actress category at this upcoming Oscars. She excels in being able to show the emotional journey and acceptance that Fern goes through about grasping her new life and the challenges she experiences. McDormand makes Fern such a likable and genuine character that the audience can relate to, which makes the film even more engaging.

An aspect of the film that stands out is the usage of real nomads as most of the cast. If you were not aware of the cast being mostly made up of these drifters, it would be easy just to assume that they are real actors and extras that were from casting calls. The representation of these people is why it is essential that these are the people that can tell their stories. Many assume that nomads are simply just homeless people living out of their cars, but throughout the film, it is clearly shown that they are not homeless at all and have a different way of living. It would also be a shame without mentioning the acting of Linda May and Swankie, who are both seen throughout much of the film. They are both absolute treat to watch, and it is hard to believe that they had never acted before and they are simply telling the story of their life.

There are close to no faults with this movie. The pacing is superb, the cinematography is stunning and the acting is out of this world. “Nomadland” is gorgeous to look at as well. The entire movie is completely shot on location in different western areas of the United States and it captures so much of the natural beauty that the landscape has to offer. Chloé Zhao and her team worked many months researching for this film, and the passion shows through every aspect.

“Nomadland” is also historic with its Oscar nominations this year. Not only is it the first year that two women have been nominated for the coveted best director award, but it is also the first woman of Asian descent to ever be nominated. Chloé Zhao is essential for “Nomadland” where she is credited with being not only the director, but also the writer, producer, and editor of the film. She is truly leading the way for more Asian representation in the film industry which has been long overdue. After her win at the Golden Globes, it would be extremely shocking to not see Chloé Zhao take home the award for best director on April 25.

The story is like no other that I have ever seen in my life. It felt as if I was seeing life through Fern’s eyes and it made me consider what is essential in my life. It encouraged me to take the world in as it is which is important in days like these.

Overall, “Nomadland” is a story that is original to its core and thrives from the true experiences of nomads. It is the perfect film to watch during a time where sometimes hope feels completely lost. Without a doubt, “Nomadland” will be taking home some trophies on the night of The Oscars. With it being such a tight race, it is hard to say which movie will win best picture, but if “Nomadland” takes home the award, it will be a much deserved and historic win.
Grade: A
Nomadland is available to stream through Hulu