Sacha Baron Cohen, Yahya Abdul-Mateen II, and many others bring historical figures to life in this superb drama. 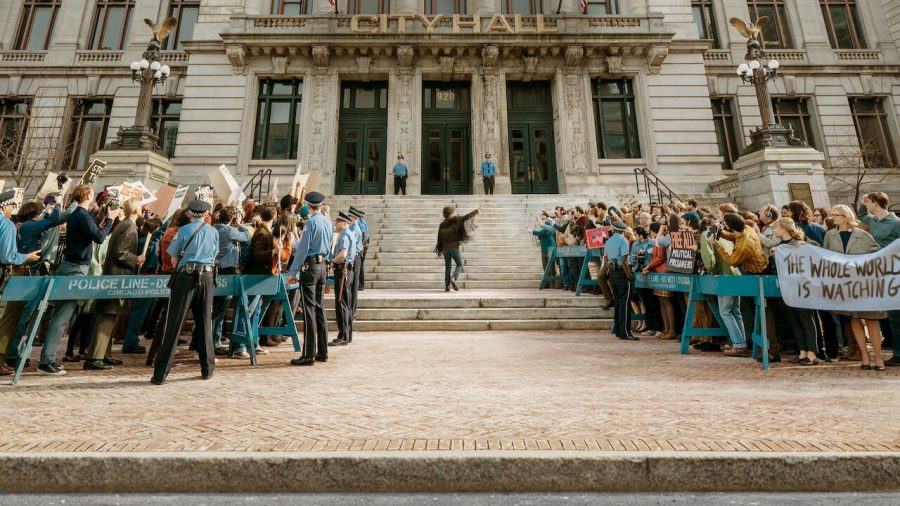 The Oscars are approaching fast at the end of this month and The Buchtelite continues to review nominated movies. The next movie in this series is “Trial of the Chicago 7,” directed by Aaron Sorkin

“The Trial of the Chicago 7” is based off of the infamous 1969 trial of seven defendants that have been charged by the United States government under the new power of President Richard Nixon for inciting riots at the 1968 Democratic National Convention in Chicago, Illinois. Protests were held at the convention due to the Vietnam War that was being fought during this time and the protesters firmly state that the police had incited the violence and not them. This trial had millions of Americans tuning in and was labeled as the case that “the world was watching”. This trial highlighted the injustices, racism, and prejudice that was present in the U.S Justice System at the time. The seven defendants were Tom Hayden (Eddie Redmayne), Rennie Davis (Alex Sharp), Abbie Hoffman (Sacha Baron Cohen), Jerry Rubin (Jeremy Strong), David Dellinger (John Carroll Lynch), John Froines (Danny Flaherty), and Lee Weiner (Noah Robbins). This trial also included Black Panther member Bobby Seale (Yahya Abdul-Mateen II) who was being wrongfully accused of inciting riots and was not granted representation by an attorney.

“The Trial of the Chicago 7” has an all-star cast that makes the movie truly stand out. Every single actor in this movie performs tremendously and each actor makes themselves known to the audience. Even though there is a long list of A-list actors in this movie, it makes you feel that you are watching these historical figures come to life on your screen.

There are two performances that specifically stood out to me the most when I was watching. The first was Sacha Baron Cohen as Abbie Hoffman. Cohen felt so natural and real during the entire movie and it felt like I was not watching a performance, but the actual Hoffman was on screen. He is able to add humor, charm, and seriousness during any time where it is needed. Cohen is nominated for ‘Actor in a Supporting Role’ for his tremendous performance. Unfortunately, I believe he will not win the award due to the other sheer talent he is up against, but the nomination is well deserved.

The second performance that completely blew me away was Yahya Abdul-Mateen II as Bobby Seale. The raw emotions and anger that he conveyed in this performance was extremely powerful. In all of the scenes he was in I could feel rage and anger flowing through my body for the way that he was being treated. I firmly believe that Abdul-Mateen was completely snubbed for not getting an Oscar nomination for this phenomenal performance.

The pacing of the film was what drew me into the movie the most. When I first started watching it, I thought that most of the scenes were just going to be strictly set in the courtroom, but it does an excellent job off flashing back to key moments of the convention when witnesses are giving their testimony. There are scenes highlighting moments before, during, and after the convention that make the film truly stand out.

There are only a small number of things that I would change about this movie. The big one being that I would explore more of United States Attorney Richard Schultz who is played by Joseph Gordon-Levitt. He is an interesting character that clearly has different ideals than the side he is fighting for. (Ok… I know there is better way of wording that, but my brain is completely fried, and I can’t think of anything else. I feel like there is a better word to describe it) I wish his character was explored more in depth with his personal emotions.

“The Trial of the Chicago 7” is one of the nominees for ‘Best Picture’ this year and I think it could be the underdog pick that comes out of nowhere for the win. It is certainly up in the air for who is actually going to win the award, but this movie holds it weight with its fellow nominees.

Overall, “The Trial of the Chicago 7” truly excels at putting this infamous trial in the light again during 2021 which is a critical time of civil rights and injustice that is almost mirrored in this movie. The characters and real historical figures will not be forgotten for a long time and will continue to inspire and amaze audiences.
Grade: A
The Trial of the Chicago 7 is available to stream through Netflix