Lynn Drive-In Movies is one of many drive-ins that is allowing a safe movie experience for families during COVID-19. 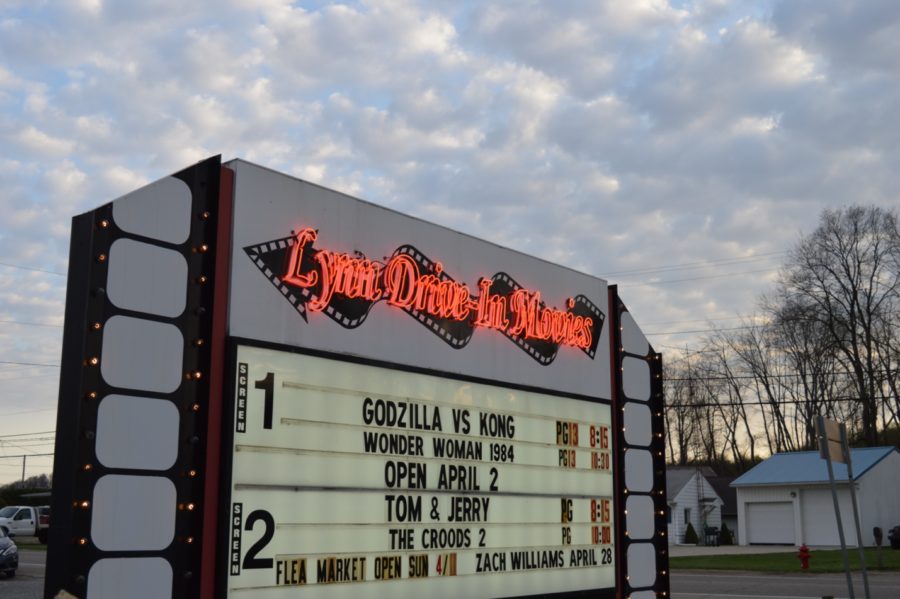 “Come as you are in the family car,” can be heard when pulling into Ohio’s oldest drive-in movie theater, Lynn Drive-In Movies. Lynn Drive-In has been a staple business in Strasburg, Ohio for nearly 75 years. It is the oldest drive-in in Ohio and the second oldest in the world. During its 75 years, it has seen many crazy things happen, but nothing could compare to the 74th season when COVID-19 hit.

“Since we were classified as a movie theater, we were immediately shut down before we even had our opening weekend,” says the owner of Lynn Drive-In Movies, Rich Reding. “We eventually got an exemption by contacting our local government representative, but we still had to wait until May 15 to open when we usually open around the beginning of April.”

Even when things were looking bright with an eventual opening, Lynn Drive-In Movies was faced with structural damage when a huge windstorm blew in on April 7. Part of the second outdoor movie screen completely came down and needed to be fixed as soon as possible. This was especially hard on the business since no income had been coming in due to the delay.

With the help of other drive-in owners and staff, the second screen was able to be finished and painted by the second week of the 74th season.

It was important once the drive-in opened again that protocols were put in place to ensure a healthy and safe movie experience for every customer. The Lynn operates at a limited capacity, masks are required when ordering concession stand items and going to the bathroom, the play area and arcade machines are closed off and there is at least a 20-foot distance between each car that is parked in the field.

With all the safety protocols put in place, Lynn Drive-In offers an escape from being stuck at home for new and old customers alike.

“I have been coming to the Lynn for nearly 25 years now,” says longtime customer, Rhonda Steiner, “I trust coming here more than I would going to a regular indoor theater at this time.”

Every night the Lynn offers two separate double features on their movie screens that can accommodate any type of movie viewer.

When it first opened in 2020, many new movies were not available to be shown due to movie companies pushing back the releases. During this time Lynn Drive-In Movies had to rely on showing classic movies. This included hits such as “The Goonies,” “Smokey and the Bandit,” “The Rocky Horror Picture Show,” and many other favorites.

These movies were a massive hit with patrons and families, and they continued to show classic movies throughout the rest of the season.

One of the biggest hits of the 2020 season was “Hocus Pocus” and “Beetlejuice” in October. Around this time of the year customer attendance usually drops due to cold weather and school obligations, but with these two movies, Lynn Drive-In and Movies would be sold out for the first time all season. People wanted to experience their old favorites movies on the big screen while also introducing them to their children. This hit made up for the lost time they had experienced at the beginning of the season.

Employees of the Lynn worked hard all season long to ensure the best and safest movie experience for the customers. At the same time, it was very important to owner Rich Reding to keep customers safe, but also the employees that work there.

“I have been working at the Lynn Drive-In for five years and it has been the best job I ever had,” says concession stand worker, Sam Carroll. “I have never once felt unsafe working here during COVID. Our boss Rich always puts his employees first which is not something many businesses do.”

The 75th season kicked off on April 9 with new releases, “Godzilla Vs. King Kong,” “Wonder Woman 1984,” “Tom and Jerry” and “The Croods 2.” With the amount of success from classic movies from the previous year, Lynn Drive-In Movies plans on showing a mixture of both news releases and classic films throughout the season. Some of the classics that might be played include, “Scott Pilgrim Vs. The World,” “Caddyshack” and the original 1996 “Space Jam.”

Lynn Drive-In Movies offers an experience that you simply cannot get at an indoor movie theater. They encourage families to come early, relax, maybe play a game or two, and truly enjoy the drive-in experience. With having digital projectors for both of their screens, the image quality is just as good as going to a traditional theater.

The drive-In will continue to follow all CDC guidelines to provide families a safe and enjoyable movie experience through these uncertain times.

Lynn Drive-In Movies is located at 9735 State Route 250 NW Strasburg, OH 44680. It is open Friday through Sunday until May 23. After May 28, the drive-in will be open 7 days a week during the summer months and back to weekends only from August 22 until the end of the season.