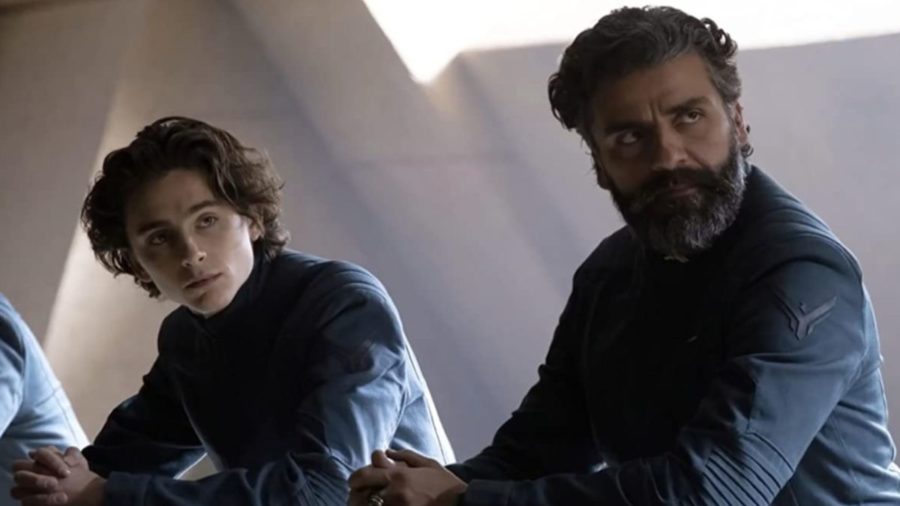 Disclaimer: I am writing this review as someone who has read the original novels “Dune,” “Dune Messiah” and “Children of Dune” by Frank Herbert.

“Dune” tells the story of Paul Atreides (Timothée Chalamet) that is destined to be the next head of House Atreides while also being gifted with great powers. His family and future are threatened by House Harkonnen leader Baron Harkonnen (Stellan Starsgard) after moving to the sand planet of Arrakis. “Dune” also features the star-packed cast of Oscar Isaac, Rebecca Ferguson, Jason Momoa, Josh Brolin, Javier Bardem and Zendaya.

“Dune” is hands down one of the best movies I have seen in a long time and probably the best science fiction film in the last decade. It immediately lures you in with beautiful shots and great introductions of characters.

I thought the casting was superb. Every single actor was able to perfectly dive into their character and flesh out their respective storylines. Everyone was fantastic, but my favorite actors had to be Timothée Chalamet and Oscar Isaac who played the father son-duo of Paul and Duke Atreides. Their on-screen chemistry is amazing, and they both play well off each other.

Denis Villeneuve has such a great way of storytelling, and you can tell how much patience and research went into creating this movie. He has a clear idea of what the rest of his interpretation will become and paves the way for the next installment.

“Dune” is best experienced seeing it in a movie theater. I understand why Warner Brothers decided to release it on HBO Max simultaneously due to the climate of COVID-19, but it simply is not the same experience watching it at home. I had the opportunity to see it in IMAX and it made me feel like I was in a whole different universe.

I fell in love with the original “Dune” books this past summer after a recommendation from my boyfriend. I read the nearly 900-page book in about a week and immediately went into the sequel. So going into this film I knew exactly what was going to happen and I thought it played out well. The visual representation that I had in my head when I was reading it was exactly what I saw in the movie theater.

It is not possible to include every single storyline from the original novel due to the pure density, but I feel like Villeneuve did a great job picking the essential stories that will help further the movie franchise.

Reading the book is not essential to enjoying the movie. I think the book really adds a whole different perspective to watching it, but again, it is not necessary.

Many have been complaining that Zendaya was used as ‘ad bait’ due to her only having about seven minutes of screen time in the two-and-a-half-hour film. Her character Chani is not featured in the beginning half of the book at all, and I went into this film knowing that she would not be in it that much. All I can say is that she will have a big impact on the second movie and will most likely steal the show.

Shortly after the release, Warner Brothers announced that “Dune Part 2” has been greenlit. I wish the green light came earlier, and they would have the opportunity to film both movies back-to-back so we would not have to wait until 2023 for the sequel, but I am more than willing to wait.

As we eventually go into the season of thinking about Oscar nominations, I fully believe that many of these actors, Denis Villeneuve, and the entire movie should receive nominations.

Overall, I think “Dune” is a perfect movie which is something I say very rarely, and I am so excited for the second part of this amazing movie. I can understand why some viewers may not agree with me due to the long runtime and lack of Zendaya. If you are a lover of hard science fiction and large worlds, “Dune” is the perfect movie for you. If it is a possibility, you should see it in a movie theater.
Rating: A+