Thomasin McKenzie and Anya Taylor-Joy lead viewers in a wonderful film about loss, fear and finding the truth. 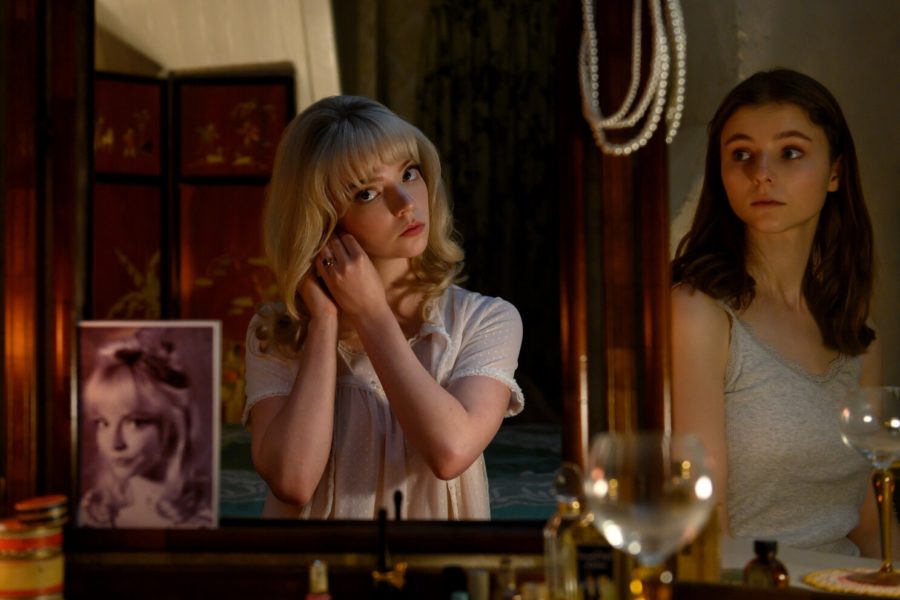 The month of October had a massive lineup of films and a great way to end it off is Edgar Wright’s new film, “Last Night in Soho.”

“Last Night in Soho” tells the story of an aspiring fashion designer Ellie (Thomasin Mackenzie) who can enter the 1960s era of London in her dreams and follows the life of the mysterious and beautiful showgirl Sandy (Anya Taylor-Joy). As time goes on, terror starts to ensue, and Ellie finds herself unable to escape her dreams even when she is awake.

The most defining part of this movie must be the atmosphere and cinematography. Whether it was modern-day London or the 1960s, I wanted to jump through the screen and experience it myself. The colors and camera shots are truly unbelievable, and you can see the amount of thought that Edgar Wright put into this movie.

I am also a huge fan of the soundtrack, which features classic 1960s hits such as “Anyone Who Had a Heart” by Cilla Black, “A World Without Love” by Peter and Gordon, “Starstruck” by The Kinks and so many other hits.

Thomasin McKenzie and Anya Taylor-Joy make a great duo and play off each other so well. You can feel their chemistry through the screen, and they are both such talented actresses. I would love to see Oscar nominations for both. It is also important to note that Anya Taylor-Joy does an amazing cover of “Downtown,” originally sung by Petula Clark.

I am someone that is not the biggest fan of watching trailers and it is something that I actively avoid at all costs. I did end up watching the trailer for “Last Night in Soho” when I was watching another movie at the theater. When I saw “Soho,” about halfway through I started to get a bit mad that I saw the trailer. The reason I was starting to feel mad is that I thought that the trailer gave away too much plot, but to my surprise, there is a very distinct twist that completely changes the theme of the movie, and I loved every moment of it.

The main antagonist in this movie is Jack, who is played by Matt Smith. I was a massive fan of “Doctor Who” years ago and that was the only Matt Smith role that I had seen, so I was a bit surprised when I saw him in the cast list. I never had any doubts about his acting, but it was just a very weird thought for me to see him play a different type of character and he completely blew me away. There are times during the movie where I feel him talking to me and I can feel the anger he is projecting. He is genuinely scary at times and is such an interesting character to watch throughout the entire movie. I am excited to see his future roles.

Edgar Wright has proven once again that he is one of the most established directors in the film community. I have loved every single movie of his that I have seen, and “Last Night in Soho” ranks at the top.

Overall, I would recommend “Last Night in Soho” to anybody that is looking for a thrilling journey of a movie and is ready to have their mind blown. The acting, soundtrack, and scenery are superb. I consider this to be one of the best horror movies that have come out this year.

Some images and topics can be disturbing and intense at times. Viewer discretion is advised.
Rating: A