This year marked the 45th anniversary of the cult classic that first grabbed viewers’ attention everywhere in 1975, “The Rocky Horror Picture Show.” The screening was held at the E.J. Thomas Performing Arts Hall on Oct. 22, with ticket prices ranging from $23 to upwards of $100. 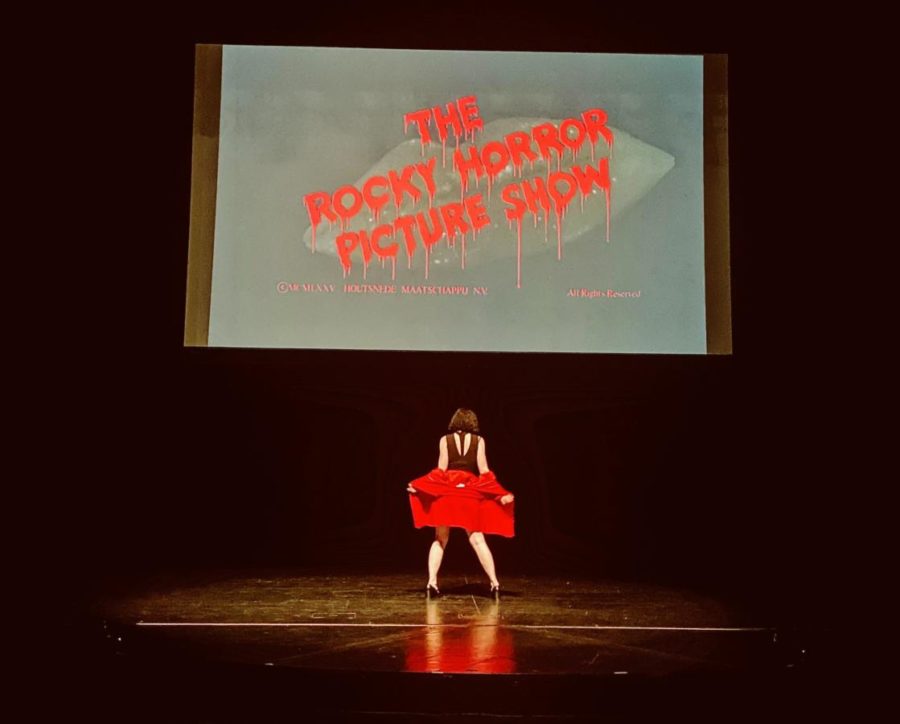 “The Rocky Horror Picture Show” (RHPS) is a cult classic among its’ loyal fans, the comedy-horror musical is a tribute to B-horror movies and science fiction. Starring Barry Bostwick, Tim Curry, and Susan Sarandon, the movie focuses on a young couple, Janet Weiss, and Brad Majors (Sarandon and Bostwick), and their night in a strange castle after their car breaks down. They soon discover their strange hosts, Dr. Frank N. Furter (Curry), are aliens who flaunt society’s sexual inhibitions and are working on creating life and getting back to their home planet. The movie features many classic songs and dance routines including “The Time Warp,” “Science Fiction – Double Feature”, and “Wild and Untamed Thing.”

Barry Bostwick, the actor who played the character Brad Majors in the original film, opened the event by saying a few words to the fans. This was a unique experience for the fans in attendance; getting to see a main character from the film right before watching the full unedited original movie.

The show’s fans find relatability in the eccentrics of the characters, with the positive message of acceptance and celebration in differences and uniqueness the show teaches its’ fans inclusivity.

“Every time I see Rocky Horror, I’m reminded that being different should always be celebrated. I love the inclusivity that Rocky brings and the creativity that’s included in every performance. Saturday’s show gave me the ultimate pleasure,” stated Alexandrea Hegarty, 26 of Chippewa Lake, a nonstudent.

The fans who celebrate their differences have banded together to create a community amongst themselves. Fans take the screenings very seriously and actively participate throughout the entire event.

The Buchtelite’s Social Media Editor, Stephanie Fairchild, had this to say about her experiences with the tour, “The first time I went to see RHPS live was in 2007 with my best friend. A few months later, I lost him to suicide. I hadn’t seen a shadow cast live show since, until Friday night, 14 years and one day after his death. The cast and crew did an amazing job and just being there was both an emotional and fun experience for me. It was so cool to see Barry there as well. An overall amazing way to spend an October Friday night on campus.” Fairchild, who is a Public Relations major here at the University of Akron, attended the event with her friends.

What is unique about a showing of the RHPS is that a shadow cast acts out the movie alongside the film. Throughout the film, the audience is also encouraged to participate by shouting out special phrases, throwing different items from a prop bag, and interacting with the cast. E.J. Thomas followed this format for their screening of the show as well including the addition of many other exciting fan opportunities. The runtime for the film was 1 hour and 40 minutes. The shadow cast, The Fishnet Mafia, acted alongside the film for the entire runtime also. Out in the lobby area, fans were able to see memorabilia, artifacts and a costume from the original movie.

This showing is the second time that E.J. Thomas has hosted the RHPS, as an interactive experience this show is unlike most of the shows that come through the performance hall. Keli Schimelpfenig, Marketing Manager with E.J. Thomas, said that the team had to bring in a special cleaning crew just for the night’s festivities (it was probably all the rice and playing cards we threw).

One of my favorite parts of the entire event was getting to see all the fans dressed up, many fans who came to the showing dressed as their versions of favorite characters (including my friends and me). Before the screening, they even held a costume contest for those who wanted to participate.

Students, faculty and UA community members who want to experience a show at the E.J. Thomas Performing Arts Hall are highly encouraged to do so.

Schimelpfenig said, “Our Broadway in Akron series is very popular, and we have Anastasia and Hairspray coming this spring and we have a whole lineup of Holiday programming. Big Bad Voodoo Daddy, Cirque Holidaze and Mannheim Steamroller are just a few of the events in a big December lineup for us at E.J.”

For tickets visit ejthomashall.com, tickets are typically subject to UA discounts and pricing but change depending on the event, company or show.