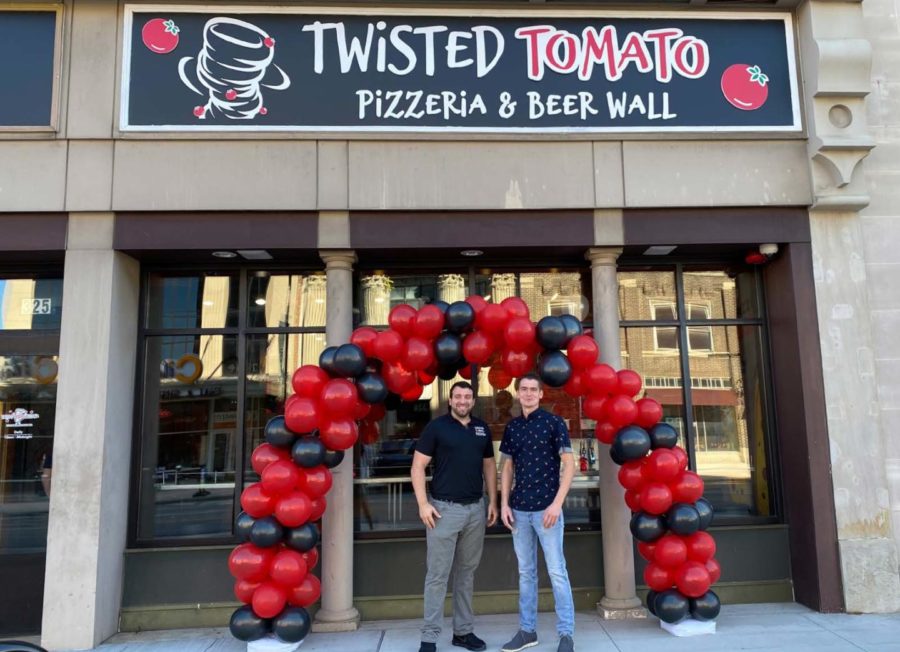 In high school, Brad Cover did what many students do, he worked at a pizza place. After going to college and returning, he stopped back to pick up a pie at his old spot in Cuyahoga Falls. The owner of what was then Guy’s Pizza told him the shop was for sale.

“I go back and tell my wife, hey, they’re selling Guy’s Pizza, I was like I’m really interested in buying,” said Cover. “She said no, you’re not buying a pizza shop.”

Eventually, despite her hesitancy, his wife started coming up with ideas, and the pair ended up buying the shop. After two years, they made some big changes and introduced an adventurous menu with a completely new set of recipes. That’s when Twisted Tomato was born.

Students at The University of Akron can now experience the “crazy twisted menu,” as Cover calls it, as well as the new beer wall at the recently opened second location at 325 South Main.

But Cover couldn’t have done it alone. His new location was inspired by an entrepreneur on the hunt for a partner.

Chris Sedlock owned a building in downtown Akron, and wanted to fill the space with a pizzeria and beer wall.

He went on a car ride to pitch the idea but couldn’t find the right pizzeria. He happened to stop and grab pizza at The Twisted Tomato. It wasn’t long before Cover and Sedlock were touring beer walls and planning a collaboration.

On Oct. 19, they celebrated the grand opening of Twisted Tomato Pizzeria & Beer Wall. People from all over Akron gathered to celebrate the grand opening, and Mayor Horrigan of Akron came to cut the ribbon, welcoming the new business to downtown Akron.

If you love beer and pizza, Twisted Tomato & Beer Wall is the place for you. The restaurant’s menu features a different pizza each month. The pizza of the month for October was the Pumpkin Pizza. They make sure customers had a chance to try it.

The Tomato also has Wing Wednesday, where regular wings are just 85 cents and boneless wings are 75 cents.

Their extra-large beer wall includes 36 self-serve taps. Beers are never repeated; each time a keg runs out, it is replaced with a new one. The taps feature craft beers and IPA. Wine and seltzer are also on the menu.

On the beer wall, each tap has a screen, where you can see the price and description for each brew.

Twisted Tomato also has what they call their social media wall. It is a painting of ‘pizza wings’ where customers can take pictures together to post on social media. Every Friday on Facebook, they go live to spin the ‘Wheel Deal,’ which unlocks a special deal for that day.

Close to campus and downtown attractions, the shop offers dine-in, takeout and delivery through Door Dash, Grubhub, or through Twisted Tomato itself.

The moral of the Twisted Tomato story is to look everywhere for inspiration, even the starter job that helped you earn some pocket money in high school or some tuition money in college. Just like Brad Cover, you could find success where you least expect it.