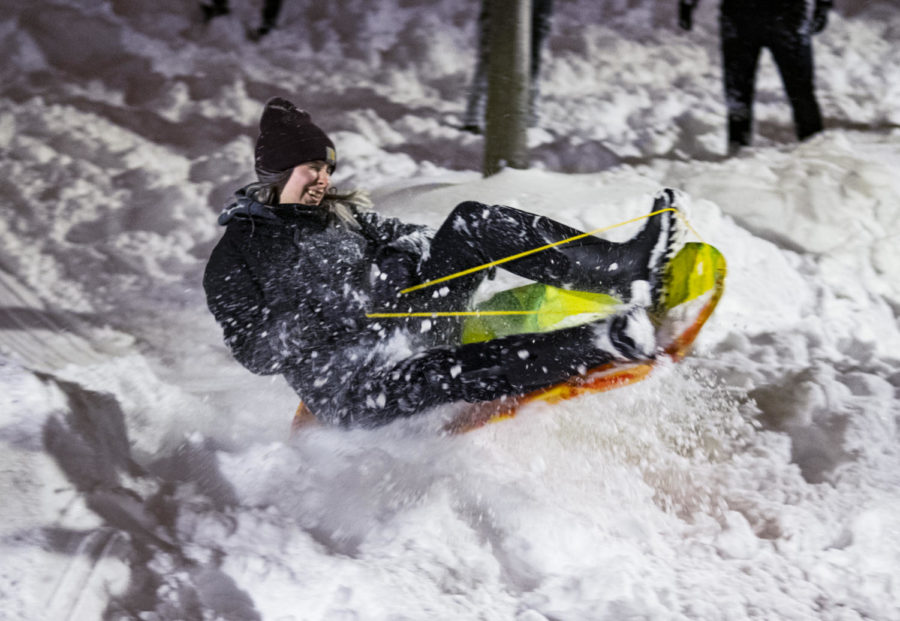 Image via Richie Walter, Junior Public Relations major with a minor in Photography.

By Summer Torok and Abigail Stopka

While Ohio weather typically warrants some snow, the winter storm Izzy had record snowfall that took Ohio residents by surprise. Most people would panic during a level-two emergency, but students at The University of Akron took it upon themselves to make the best of it.

On Jan. 17 at 1:30 p.m. the Zips Barstool social media account released a tweet that invited everyone to a snowball fight. The Tweet read “TONIGHT, 9 PM. COLEMAN COMMONS. SNOWBALL FIGHT. TELL EVERYONE AND BRING EVERYONE.” By 6:30 p.m., the Tweet had garnered almost 800 likes. The University of Akron students did not disappoint.

By 9 p.m., hundreds of students had flocked to Coleman Commons in the 17 inches of snow to celebrate what some would consider a disaster. When 9:30 p.m. rolled around, snowballs flew everywhere. Colman Commons turned into a war zone as students made snowballs and catapulted them into a crowd of students near Buchtel Hall. Some students even brought balloons, glow sticks and sparklers to spice it up.

Many students brought sleds to the event and took advantage of the hills on campus. Students who didn’t bring sleds didn’t miss out on the activity, however, as many were willing to share their sleds with those who did not have one.

“It was nice seeing everyone outside playing in the snow instead of worrying about work or school,” junior Sami Butler said. “It brought the students together during this unusual time.”

The stairs in front of Buchtel Hall transformed into a makeshift slope, and fearless students took turns sliding down while others watched and cheered them on.

Many students brought cameras and captured this historical moment.

“Tonight felt like a movie,” senior Jake Herron said. “Everyone coming out, forgetting about everything else and just having a good time.”

After about 15 minutes of the intense snowball fight, students began to break away from the crowd.

Students covered every inch of the fields in front of Coleman Commons. They were sledding, running, playing catch and just acting like kids.

Snowstorm Izzy created an opportunity for the University of Akron students to grow closer than ever.