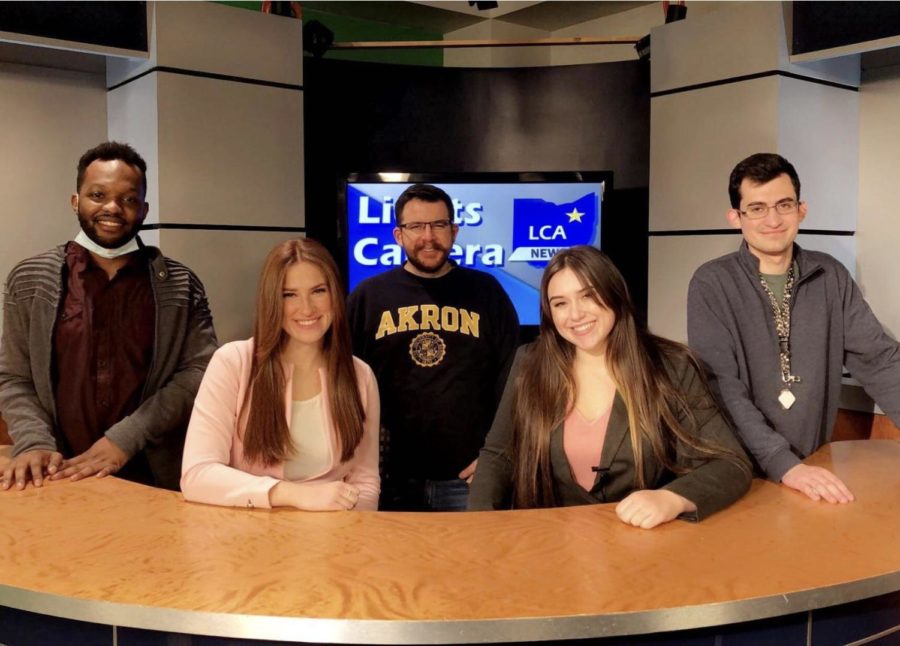 When I started my first year here at The University of Akron, it felt like the world was at my fingertips. However, as a naïve, undecided major who did not feel like she belonged, it was much more complex than I could have ever imagined.

I tried relentlessly to find my place in The University of Akron community to no avail.

After a lot of thought and some tough decisions about where I wanted to see myself in the upcoming years, I declared my major: Media Studies, which is categorized under The University of Akron’s School of Communication.

I was excited, of course, but utterly unaware of how much this decision would truly impact me and my outlook on my future.

Class after class, I found myself increasingly enjoying the content I was being taught. Then, I took the Multiplatform Production course, a class where you dip your toes into the different programs and tasks you will be asked to complete in a media-related job.

I had the opportunity to put videos together using the video production tool Premiere Pro and edit photos in Photoshop. Eventually, my professor reached out to me during class to inquire if I had considered joining ZTV or WZIP.

He sent me the information almost immediately. I decided to explore these programs and see what they had to offer.

I went to the initial training, and I could hardly believe my eyes. First, we looked at the radio station which was incredible. Then, we discovered that WZIP is one of the most popular student-run radio stations in the country.

The friendly faces of the individuals in WZIP contributed to its welcoming atmosphere. Immediately, I envisioned myself sitting in the chair at the DJ board and talking into the microphone.

There are many departments at WZIP that offer opportunities to gain real-world radio experience. Whether it’s sports, underwriting or promotions, there is a place for everyone’s interests.

After learning more about WZIP, we got to take a deep dive into the video production organization, ZTV, and surveyed all its programs.

With seven shows that cater to a variety of interests, ZTV is home to a wide range of students. Some majors within the program include Media Studies, Financial Planning or even History.

The shows include geek culture, arts, and entertainment, sports highlights, updates and much more.

In ZTV, you learn how to operate a camera, edit videos, and create packages for your specific show. The real-world experience is unlike any other, and I instantly saw myself doing this for the rest of my life.

Eventually, within WZIP, I found my home being a part of the production team and serving as a live DJ.

While making sweepers, a short segue between songs that identify or promote the station, I learned how to use Adobe Audition more in-depth. I also became comfortable being live on-air, doing weather reports and talking about what was on my mind that day.

When it came time to decide what show I wanted to be a part of on ZTV, there were a couple that came to mind, but “Lights. Camera. Akron!” was where I belonged. The decision was one I will never forget.

I was so dedicated to my show in ZTV that I didn’t hesitate to pick up the new producer position when the opportunity came my way. Although it meant that I had many more responsibilities to fulfil, I knew that circumstances would not have fallen into place like this if I was not meant for the position.

Now, I spend every day of the week on the third floor of Kolbe Hall with my peers. They were once strangers who quickly became my close friends. I find myself laughing more, working harder and finding immense pride in what I do.

The connections I have created since joining WZIP and ZTV are unbelievable. The demo reels don’t look bad, either. A door that I didn’t know existed opened wide for me, and the opportunities came barreling at me at the speed of light.

If there is one piece of advice I could give to an incoming student, it is that joining WZIP and ZTV could be the start of something big. It could also be just a fun hobby. Nevertheless, there is no doubt that you will meet some of your best friends and make the fondest memories along the way.